Home Gay Life Gay kissing in public will be reported to police at Russia World... 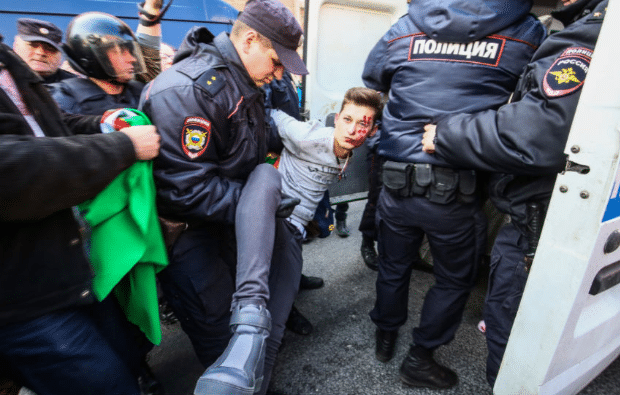 Gay kissing in public will be reported to police at the Russia World Cup, a homophobic group has warned.

The international soccer competition will kick off across 11 Russian cities next week, and LGBTI rights groups are very concerned.

A gay insider at the Russia Football Union has revealed to Gay Star News higher ups ‘don’t care whatsoever’ about LGBTI fans being assaulted, fined or imprisoned. He has told us that any attacks on the LGBTI community will be ‘covered up’ by claiming they are being fined for ‘hooliganism’. The full interview will be published next week.

But ultra-conservative groups have been less than subtle about their plans to tackle the influx of foreign visitors.

‘If two men are kissing each other at the World Cup, we will tip off the police, drawing their attention to it and the rest is a police matter,’ Oleg Barannikov, a head coordinator of the Cossack volunteers with the police told Radio Free Europe-affiliate Current Time.

‘To us, values mean the (Christian) Orthodox faith and the family come first.’

It is likely the Cossacks will report the men on breaking the ‘gay propaganda’ law.

Russia’s Football Union has said it will not ban World Cup visitors from showing Pride flags.

Alexei Smertin, an ex-football player who is now the union’s anti-racism inspector, said people would not be fined for ‘expressing their feelings’.

But a group of Russian thugs have also threatened to kill gay football fans who come to the World Cup.

Pride in Football – an alliance of LGBTI football fan groups – has had to report death threats to police.

Emails have been sent to the group warning them LGBTI people will be ‘hunted down and stabbed’.

‘We’ve had people say that if they find us they’ll stab us, so it’s been a mixture but they’re being dealt with seriously and those investigations are still ongoing,’ he said. 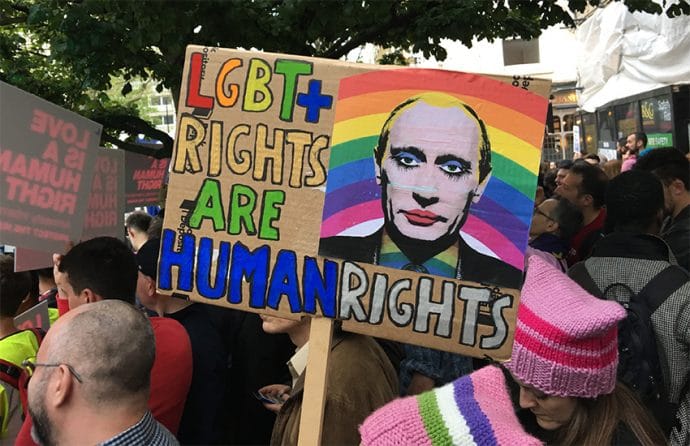 This month the Football Supporters’ Federation issued a guide advising LGBT fans not to publicly display their sexuality.

This means LGBTI people will not be able to hold hands or kiss in public.

Officials have suggested the ‘gay propaganda’ ban, enacted in 2013, will not be in effect during the World Cup.

However, Vitaly Milonov – the author of the law – has said the government cannot decide on a whim to suspend legislation.