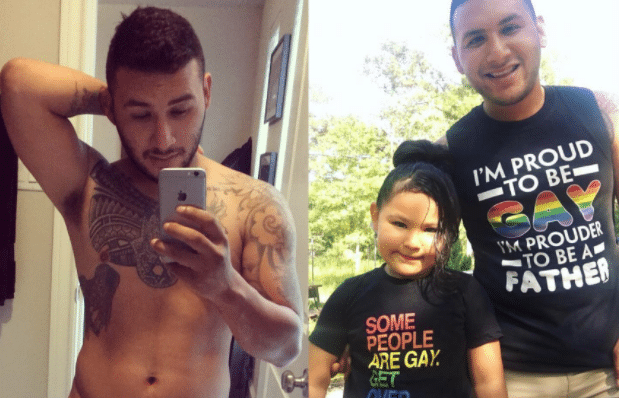 ‘My daughter is my everything’

Being a single dad and navigating dating is incredibly tricky, according to one gay man.

He told Gay Star News: ‘I have always known I wanted a family.’

Juan wanted to fill the void of the love he felt he didn’t get growing up. So in 2009, Juan and his best friend Carol Fredericks decided to have a child.

When his daughter was born, Juan describes it as ‘the happiest day’ of his life. 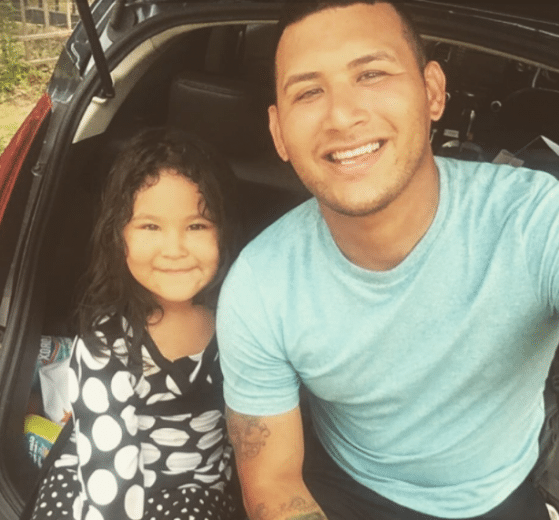 His daughter became his one and only priority as he focused all of his attention towards her. When he would occasionally go on dates, the single dad started encountering issues.

He said: ‘I dated but I’ve learned that having a child and a love life isn’t always easy. I encountered people liking me a lot but not being ready to be a parent or have that responsibility.

‘I also came across guys not being able to handle that sometimes I canceled plans due to my daughter,’ he said. 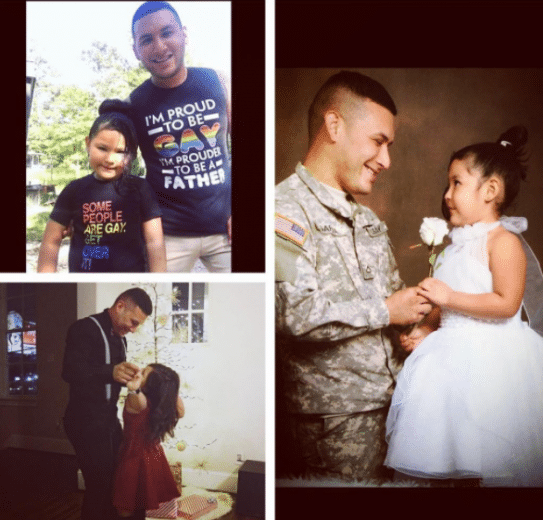 One particularly nasty ex seemed fine at first about Juan having a daughter. It started getting serious as he moved closer to his boyfriend to be able to spend more time together.

But then that all changed.

One day, his boyfriend randomly said: ‘I’m overwhelmed and I can’t do this anymore.’ So they broke up.

‘She is my everything’

On dating as a single dad, Juan said: ‘I always take my time. I will not bring my daughter around to just anyone.

‘She is my everything and I don’t want her to hurt or get attached to anyone and then question why they aren’t around anymore,’ he said. 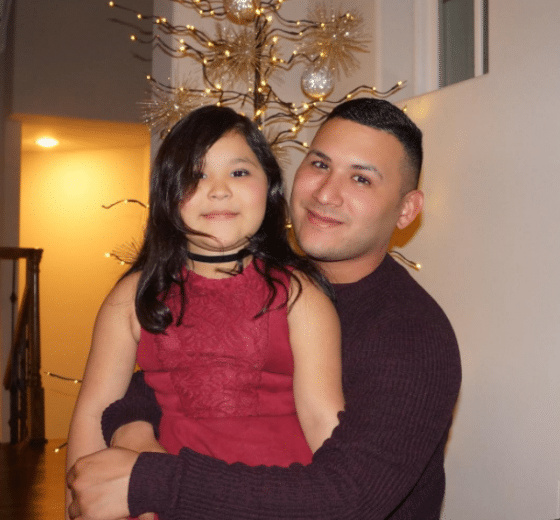 But one night in 2015, he met a guy named Tommy Espinoza at a taco truck. They hit it off and exchanged numbers. They talked for a few months, until Juan had to go to a two week-long training session.

But they stopped talking after that. Then a year later, Juan’s friend wanted to set him up on a date with a guy he knew.

When Juan arrived to the date, it was Tommy. They couldn’t believe it.

Juan said: ‘We talked about how funny it was and that it was meant to be.’ 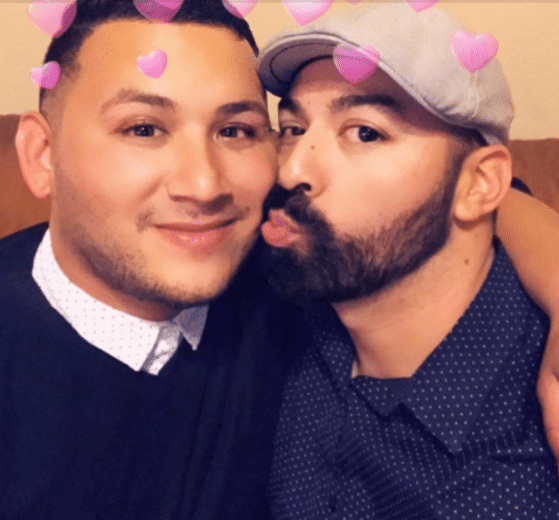 The inevitable meeting of his daughter loomed in his mind. But when it actually happened, they got along perfectly.

Juan said: ‘The way he interacted with my daughter was truly amazing and made my heart melt. It was ultimately what made me fall in love with him.’

He added: ‘My daughter absolutely loves him. We took her to Disney World for her birthday and that was the first time she ​​called him dad.’

‘She couldn’t be happier our family is finally complete’

Juan said his relationship with Tommy is perfect because he also really wants a family.

‘Our relationship was so easy and we talk about everything. He is truly my best friend, my mentor, my cheerleader and my partner,’ he said. 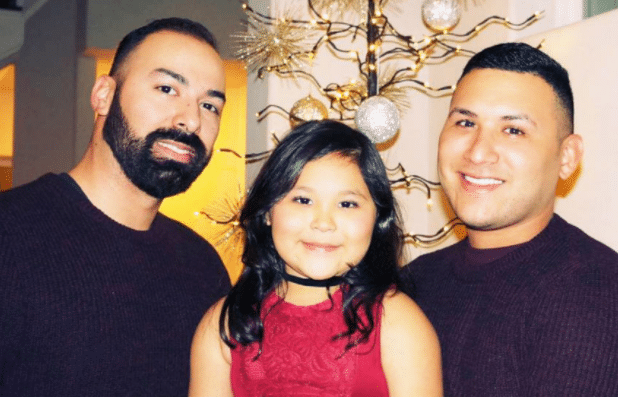 They went on a trip to Belize last year and on the second day, Tommy got down on one knee and proposed.

Juan explains: ‘I was so excited to go wake boarding and I was rushing him to get in the water but he was on the sand doing something…’

It turns out Tommy was writing WYMM (will you marry me) in the sand and Juan had no idea. 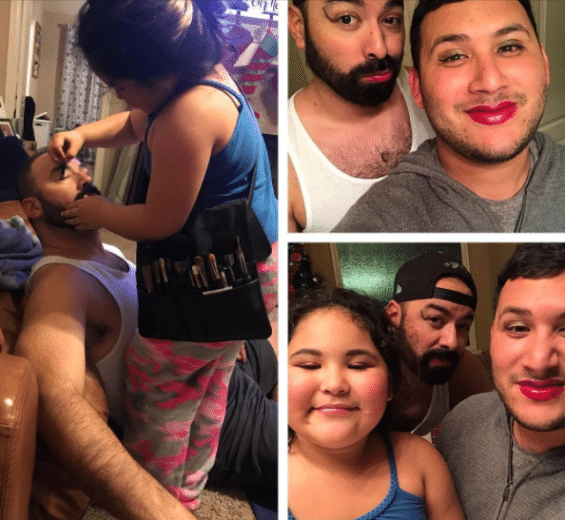 Juan joked: ‘I hit him and asked if he was kidding. And then I said yes to him.

‘When I told my daughter, she was so excited. She loves him,’ he said.

The family moved into their own home together in Houston, Texas in August last year and everything’s moving along great.

And then something amazing happened.

An old friend of Juan’s from the military said she wanted to donate an egg to help the family grow even bigger. 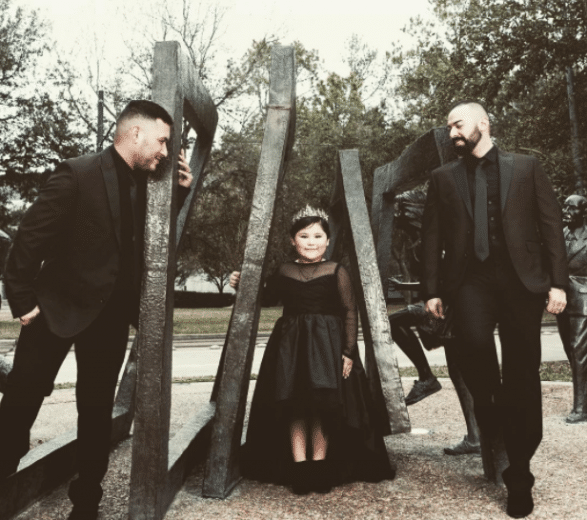 Juan explained: ‘My daughter wants a little brother or sister. She’s great with babies and helps with everything from feeding to burping to playing with a baby for hours.

‘The only thing she doesn’t do is change diapers,’ he joked.

So the family are just looking for a surrogate at the moment. They started a Go Fund Me page to try to raise the funds for the whole process.