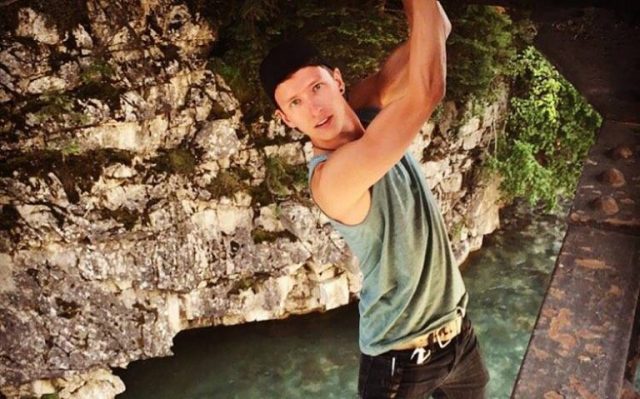 Warning: This article contains graphic images that some people might find distressing.

A gay man was reportedly attacked by Trump supporters on election night leaving him bleeding and requiring five staples in his head.

Chris Ball, a Calgary film producer, spent election night watching poll results at a bar. As the evening progressed tensions began to rise from supporters on both sides of the political spectrum.

“People started launching homophobic slurs at me from afar,” he told Metro News. “I mean, I kind of got into it, but I didn’t want to provoke them.”

They were hurling homophobic slurs and allegedly saying things like: ‘We got a new president you fucking faggots.’

When he later left the bar, alone, he was reportedly jumped by a group of men – it was then that one smashed a bottle over his head. Chris fell and blacked out.

“When I came to, I remember waking up and wiping the blood from my eyes. I called some friends, they picked me up and I went right to the hospital,” he explained to Metro. Writing on Facebook after the media picked up on the attack, Chris said: “Thank you everyone for the support and good vibes. Just wanted to say I’m alive and well. And still very gay.”

He did however, explain to Metro that the attack might not have been entirely politically based. It was more a hate issue, made more dangerous by the charged atmosphere of a controversial election night.

Chris’ story has been shared by friends and family on Facebook, with one person writing: “My good friend, Chris Ball, was bottled in the face by a celebratory Trump supporter – because he is gay.

They continue: “This hatred, bigotry, and senseless violence all comes from the same part of America that voted in a demagogue who spits hatred as his rhetoric.

“Please take the time to reflect on what is going on in the world, and the things you can do to keep the world free of hate – hate that is becoming all too common now of days.”