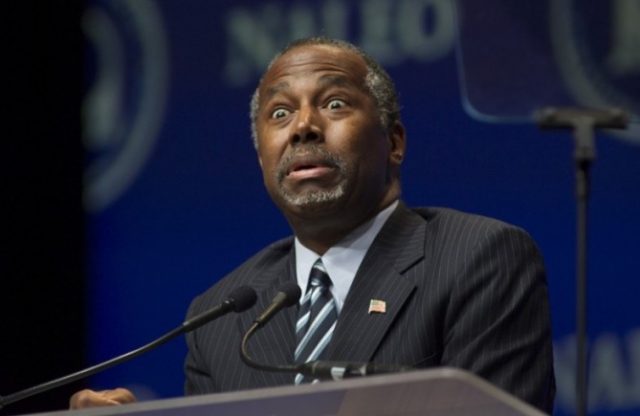 The good news is that Ben Carson woke up momentarily from his three-hundred-year slumber to mumble incoherently about you. The bad news is that he didn’t have anything very nice to say. Apparently he thinks that future mass killings are coming, and they’ll be the fault of gay couples.

And really, that’s it. There’s no more context, no more explanation that makes it make sense. He was at the Pensmore National Symposium on Religious Liberty — of course, naturally it was a religious event — and he said that “there will be mass killings once again” because “the peace that we experience now will be only a memory.”

When pressed for details on the killings, he explained that it was because of “the whole gay marriage issue.” Uh huh. He went on:

“Why must they change it? I believe the reason is, if you can change the word of God in one area, then you can change it in every area. It’s the camel’s nose under the tent, and it will just be an avalanche of one thing after the other.”

Just to remind you: this is a man who got close enough to becoming president of the country that he was allowed in the big-kid debates. He’s still being followed around by reporters. He’s advising Donald Trump. He said that gay marriage causes polygamy. And even if Donald Trump didn’t exist, this is the kind of person considered credible by the Republican Party — or at least, what’s left of it. Remember that, gay Republicans, next time you’re trying to defend your party affiliation.