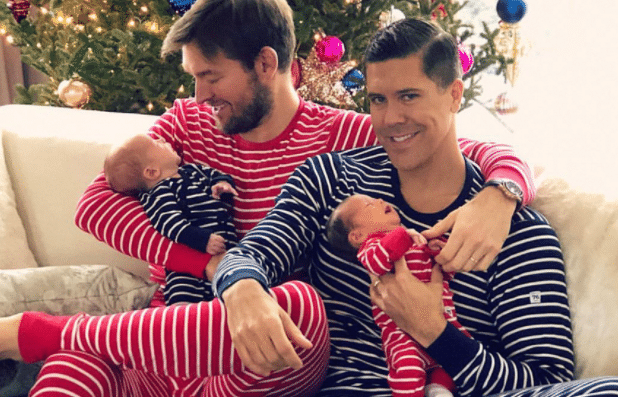 Double the trouble and twice as much love!

Because surrogacy and IVF treatment can more often lead to multiple births, gay dads raising twins is not uncommon.

We bring you images of just a handful, along with some insight into their family life.

The Vanicek family live in Prague in the Czech Republic.

‘Our girls were born in Madison, Wisconsin (US),’ Dave tells GSN. ‘We are still in touch with their surrogate mother. I’ve just been baking Christmas sweets with Adele, the ginger one, and Marie, and they help me prepare a coffee every morning on our coffee machine.

‘Raising twins, sometimes you have to be like an octopus, because they are very active and need a new game or activity every five minutes. Feeding time is funny – and our dining room looks crazy after just a small snack. Food is everywhere, but we love it.’

Fredrik Eklund, known for his appearances on TV’s Million Dollar Listing New York, and his husband, Derek Kaplan, welcomed their twins in to the world last week!

Happiest moment of my life. Welcome Fredrick and Milla to the world. ?‍?‍?‍?

Eklund announced the arrival of little Fredrik and Milla with a beautiful Instagram posting (above), calling it the ‘Happiest moment of my life’.

We’re so in love with them. There really are no words. I still cry often… just looking at them, feeding them, kissing them. They’re so perfect, they really are everything. I still can’t believe it. Today Milla and Freddy are four days old. My promise to them is to always love them and make them proud. #grateful

He followed this with another posting (above), saying, ‘We’re so in love with them. There really are no words. I still cry often… just looking at them, feeding them, kissing them. They’re so perfect, they really are everything. I still can’t believe it. Today Milla and Freddy are four days old. My promise to them is to always love them and make them proud.’

Ryan and Chris are dads to Olivia and Connor

‘Raising twins has been an amazing experience. I’m an only child so it has been a blessing to watch these two little humans connect with each other and with us.

‘Learning their subtle personalities and discovering who they are has been one of the most awesome parts of being a Dad. They are getting to know us while we get to know them, even though it feels like we’ve all been together a lifetime.’

Not all twins are the result of surrogacy. Dads Danny and Justin became proud parents to twins Parker and Emma last month after three failed adoption attempts.

As many people know @jusdem82 and I have been in the process of adopting a newborn. The process has brought us through several difficult moments. With 3 failed attempts of expectant mom’s backing out on us, it brought us to something beyond what we could have imagined. Throughout our difficulties our friends and family kept reminding us that “everything happens for a reason”. Well it couldn’t be more true because with each failed placement it brought us closer and closer to our children. That’s right I said children! On Monday 11/6 Justin and I were blessed with Parker and Emma! Yes twins!! Thank you to everyone that supported us through this journey. We wouldn’t have been able to have been successful or sane without you! Thankful for our blessings and for the gifts we have been given! #worldadoptionday #adoption #gaydads #twins @gays_with_kids @adoptionstar @gayswithbabies @gayswithstories @theellenshow @twiniversity @twins.babies @twinsandmultiples @official_twinmom

‘The joy of having are children is definitely that we never have to go through the adoption process again,’ Daddy Danny told GSN.

‘We had three failed adoptions, and two of them were actually scams. So there’s the comfort of knowing our family is complete, that our kids have each other and can grow up together.

‘Some of the challenges are it always seems like both of us are on call. Our original plan was that we would take turns every night waking up and feeding. Now, instead, we each are responsible for one all night. Although all of these things really are not challenges.

‘After 16 months of heartaches and failed adoptions all of the “challenges” seem trivial. Rather than challenges, I see them as blessings.

‘Our twins just turned one month old yesterday so thus far I haven’t really had many challenges. May be the challenge is going back to work and affording child care, but again, these are all things I’m fortunate to be faced with.’

Singer Ricky Martin became a dad to twins Matteo and Valentino in 2009. He is engaged to the artist, Jwan Yosef, and is one of the world’s most high-profile gay dads.

Dads Andy and Tyler and sons Caellum and Emmerich.

‘We love sharing everything with our twins,’ Andrew tells GSN. ‘From travels to dancing to hiking, we bring them everywhere. As for challenges, there’s never a moment your hands aren’t full. Meeting the demands of these two is a full time job!

Australian dads Chris and Sean with their boys Hunter and Hudson.

?❤️LOVE IS LOVE ❤️? It is overwhelming to hear that the Australian parliament has finally passed the Marriage Amendment Bill to legalise same-sex marriage here in Australia!!! Now we are the 26th country in the world to legalise same sex marriage!! What does all this mean to us? Now our children can grow up in a country that recognises their parents love is same as other children in their community. Our children can grow up in a world with less hate and more love!!! It teaches all of us to fight for equality for ourselves and for others. I hope in the near future we will be hearing more countries making the commintemnt to their LGBTQI communities that their loved, recoconised and respected, by giving them the right to love who ever they love!!!! Will Chris and I get married? YASSSSSSS!!!❤️ #marriageequality #samesexmarriage #weddingplanning #lovewins

‘The joys of raising twins is being able to watch them grow, learn and too see their individual personalities develop! It’s amazing when one teaches the other a new thing. For example Hudson has taught Hunter how to fist pump!

‘The challenges with twin boys I would say is they love to run. But the positive thing about that is I don’t need to go to the gym often!’

? GOODBYE & HELLO? This week we said Goodbye to our home in Sydney and Hello to our new life in Lithgow! The move to Lithgow is very exciting for us because we will be closer to Chris’ business and to our families. The main reason why we decided to make the move is because I’m going back to ?Uni at Charles Sturt University in Bathurst!!! The next three years will allow me to complete my studies, allow the boys to have a big backyard with chickens?, and allow us to renovate our Paddington terrace for our move back!! The next exciting chapter of our lives has begun!! #gaysinthebush #countryliving #homeiswherefamilyis #nextchapter #makeyourownpath #makeyourdreamscometrue

It was only in mid-October that celebrity Insanity workout trainer Shaun T announced that he and his husband were expecting twins via a surrogate. The news followed several years of false starts and setbacks in their journey to parenthood.

Our boys graduated from the #NICU to their own room! 1 step closer to going home! We are so proud of them and we ABSOLUTELY LOVE the #nicunurse staff! ?? ????

Their twin boys, Sander Vaughn and Silas Rhys, actually then arrived early, at 32 weeks, on 17 November. They had to be placed immediately in a neonatal intensive unit. Last week, the proud papas were finally able to take their sons home. Congratulations, guys!

And everybody’s hands go up!!