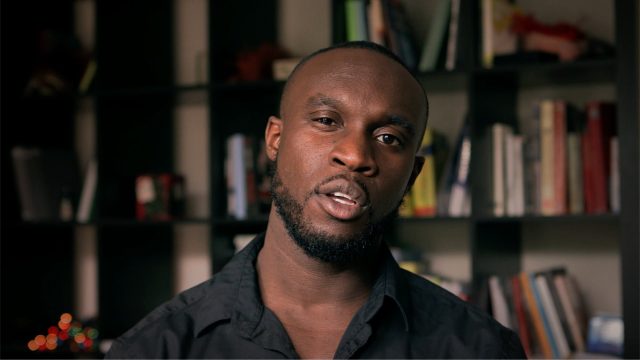 “Size generally matters in the gay meat market,” author Jeremy Helligar writes in a new op-ed at Honey9, “regardless of racial considerations, but the curiosity and expectations so often attached to dark meat raises the ick factor to a level of grotesque.”

Helligar is the author of the humorous travelogue Is It True What They Say About Black Men?, which examines how gay black men are viewed, and often objectified, in countries all around the world.

“Lately, though, I’ve noticed a shift, especially on Grindr,” Helligar writes. “Guys rarely ask me if it’s true what they say about black men anymore. That’s so 2011. Now they often send me messages that say, simply, ‘BBC’, or occasionally, ‘BBC?’–and not because they’re confusing me with the British broadcaster.”

BBC, for those of you know may not know, is internet shorthand for big black c*ck. And, in Helligar’s opinion, it’s kinda racist. Here’s why:

“It’s basically saying that as a black man, that is my primary value,” he says.

“I haven’t figured out if the gay white men who use it do so because it’s easier to write,” he continues, “or if it’s just too embarrassing to spell out ‘big black blank.’ Whatever the reason, the implication is the same: I’m no longer a three-dimensional person. I am my big black blank.”

As a result of constantly being asked about his BBC, which Helligar says has quickly become “the new bane of my gay existence,” it’s opened his eyes to another problem in our society: the crap women have to put up with when it comes to being objectified.

“Would you want your sister to get involved with a guy who refers to her as ‘BB’ for ‘big breasts’?” he asks. “The sad thing is, most women probably hear far worse on a regular basis. I sympathize. I empathize. I know how it feels.”

“I’m certain that I haven’t seen the last of ‘BBC,’” Helligar adds, adding that he’s sure “my protestations [over the term] will likely be met with shrugs.”

“In a world where a rich white man can be caught on tape boasting about sexually assaulting women and still be elected leader of the free world, no one’s going to get too worked up over a little ‘BBC’…except for the men it objectifies.”

“And ladies,” he concludes, “we feel your pain.”