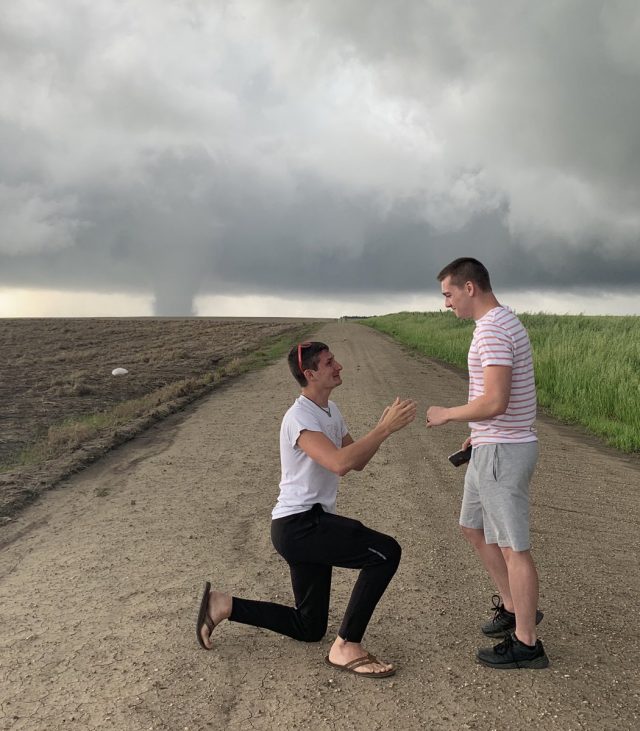 A meteorologist asked his boyfriend to marry him in front of a dramatic storm.

Meteorologist Joey Krastel, 27, proposed to his boyfriend, Chris Scott, a fan of the 1996 film Twister, in Kansas.

Krastel posted a photo of the romantic proposal on Instagram, with the caption: “The 2 loves of my life.”

Krastel, a risk analyst for the Maryland Emergency Management Agency, saw his first tornado at the age of four.

Speaking NBC News, he said: “It was at that moment where I knew everything I wanted to do from then on out.

“Every meteorologist has a weather story from when they were little that defined their path.”

Scott’s interest in storms began when he watched the film Twister as a young boy.

Starring Helen Hunt and Bill Paxton, it depicts a group of storm chasers researching tornadoes during an outbreak in Oklahoma.

Scott began to follow Krastel on Instagram, where he posted pictures of storms, and the pair later got in touch.

“That’s why it was always in the back of my mind to get engaged during storm chasing,” Krastel said.

“I felt like it would be this perfect way to seal the deal.”