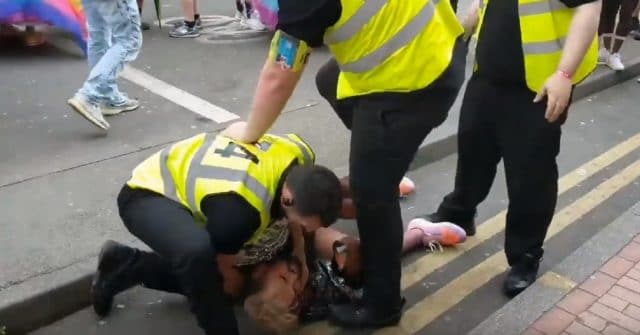 A gay Muslim activist at Birmingham Pride was wrestled to the ground by security and confronted by police officers wielding assault rifles after he refused to buy an official wristband.

Pride organisers told PinkNews they are investigating the incident at the parade on Saturday (March 25), which was officially led by other campaigners representing Birmingham’s LGBT+ Muslim community.

Ferhan Khan, who lives in London, told local outlet I Am Birmingham that he was initially ushered into the contingent near the front of the parade alongside festival organiser Lawrence Barton and other LGBT+ Muslim activists.

Speaking to the outlet, Khan claimed that he dawdled behind the group to greet a friend, only for a security guard to refuse to permit him to return to the group because he did not have an official wristband.

Video footage captured the moment Khan attempted to walk past the security guard, only to be physically tackled and wrestled to the ground.

The clip shows three security officials physically restraining Khan on the hard concrete, as another employee attempt to block the incident from being filmed.

Armed police officers carrying assault weapons can also be seen standing next to Khan in the video footage.

“We can confirm that we are looking into this individual case and therefore it would be inappropriate to make any further comment at this time until all the facts are known and the investigation has been completed.”

In a statement, Khan said the situation was “very triggering” as an LGBT+ person of colour, adding: “I never imagined I would encounter it at an LGBTQ+ Pride event. The toxic masculinity they shown was of such a violent nature that I feel scarred by it.”

However, speaking to PinkNews, witnesses questioned the accuracy of I Am Birmingham’s report and challenged a number of Khan’s claims about the incident.

In the video Khan claims to have “lost” his wristband, but sources told PinkNews he had been told to buy a wristband prior to the incident and failed to do so.

Khan does not attempt to explain that he was part of the contingent alongside Pride organisers in the video, instead expressing a belief that entry to the parade should be free.

Multiple sources also challenged the suggestion that Khan had been “invited” to be part of the group leading the parade, which was officially led, as announced in advance, by lesbian Muslim campaigner Saima Razzaq, gay Muslim activist Khakan Qureshi, and ‘No Outsiders’ teacher Andrew Moffat.

Speaking to PinkNews, Saima Razzaq said that Khan’s version of events was “inaccurate.”

She said: “I do not condone the actions of security staff as presented in Ferhan’s video and this needs to be investigated.

“However I do feel this situation could’ve been avoided and can not stress how hospitable the Pride team were to Khakan, Andrew and I.

“For the record, Khakan, Andrew, Lawrence and I have been in talks for months about the parade and Ferhan was not part of these conversations.

“During the parade Ferhan took it upon himself to join us at the front and of course in the spirit of solidarity we did not push him back.”

She added: “As Pakistanis representing our community I am ashamed by Ferhan’s behaviour and I do not feel he’s setting a good example to the young people we are so desperately trying to support.

“Before the incident Ferhan was told that there were no complimentary wristbands left and he was given the option to buy one which he chose not to follow, the rest is history.”

Razzaq added that the response she received at the event was overwhelmingly positive, and “one of the biggest gestures of solidarity that I’ve ever experienced as a Brummie.”

Over 100,000 spectators lined the streets for the event, which was the largest in Birmingham Pride’s 22-year history.