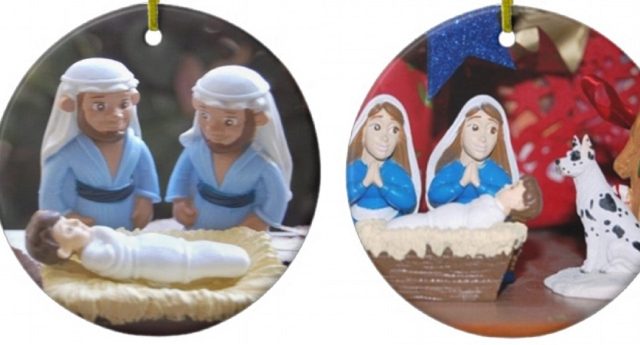 Christmas decorations featuring same-sex couples have been pulled from sale after demands from evangelical Christian campaigners.

Anti-LGBT campaigner Andrea Williams of Christian Concern had fumed about the Christmas ornaments, which were being sold by a designer on crafts website Zazzle.com.

The twin decorations, which were on sale for £13 each, feature two men and two women over the baby Jesus, in place of Mary and Joseph.

Venting to MailOnline, Ms Williams – whose fringe activist group supports gay ‘cure’ therapy – said: “These decorations are a desperate and ridiculous attempt to pretend that homosexual relationships are pure and holy.

“They blasphemously portray the Lord Jesus being parented by a homosexual couple. What depths will the LGBT lobby stoop to in order to try and normalise their behaviour?’

“God’s design is for children to grow up with a male and a female parent. The Lord Jesus was parented in this way, and this is what is best for children.

“The LGBT lobby is not interested in the welfare of children but only in pursuing its own selfish agenda.

“Trying to rewrite the Christmas story is their latest self-deception.”

California-based artist Mark Thaler, who created the decorations, appears to have now removed them from sale.

He had initially told the newspaper he would consider removing them “out of respect for his fellow humans”.
The decorations are no longer listed on Zazzle.