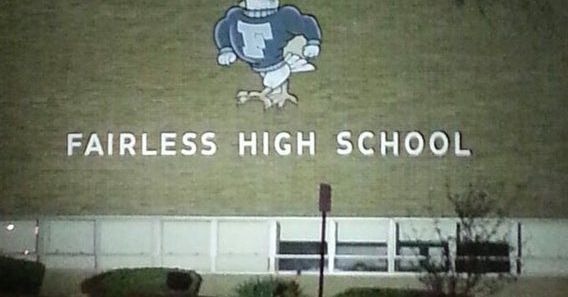 A northeast Ohio family has filed a federal discrimination lawsuit on behalf of their son — a former high school basketball player— alleging he endured discrimination and harassment from coaches and administrators after he was outed as gay.

In one instance, the coach is alleged to have told the player that he didn’t have to join team prayers because he knew the teen “hates Jesus.” In another case, the coach had the player feel his arm muscles, calling him weak.

The player in question, whose name is being withheld to protect his identity, attended Fairless High School near Canton. That’s not a typo; the school and district really are named “Fairless.”

The lawsuit, as detailed by the Columbus Dispatch, states that his troubles began when he was outed by another student in Spanish class in the fall of 2017.

The lawsuit names Fairless assistant principal Mike Hall as having told the student that “he chose to be bullied because he chose to be gay.”

According to the filing, the suit alleges that things got worse when the teenager took Fairless basketball coach and athletic director Kevin Bille into his confidence and told him he was gay.

The student claims that after taking the risk of coming out to an authority figure, Bille allegedly proceeded to abuse that trust. The coach is accused of unleashing a series of humiliations and microaggressions over the remaining years of the student’s high school career.

This past April, Bille’s contract as coach and AD was not renewed and the school is seeking his replacement. No reason was given for the dismissal and neither Billie nor Fairless administrators — some of them named as defendants — have commented on it publicly.

The suit accuses Bille of reducing the student’s playing time upon finding out that he was gay and giving him “punitive workouts” during practice.

And that was just the start. The lawsuit goes into further detail about the problematic relationship between player and coach. According to the student’s attorneys, it all culminated in the coach denying his player a varsity letter and instead awarding him a “certificate of participation.”

Other Fairless High officials were of no help, according to the lawsuit, which further alleges that several of them joined in tormenting the student. The suit names Fairless assistant principal Mike Hall as having told the student that “he chose to be bullied because he chose to be gay.”

Teacher Janice Courtney stands accused of denying the student membership in the National Honor Society, despite the fact that he had met all of NHS’s objective requirements.

And the lawsuit claims that all of Fairview High’s administrators failed to step in and help when other male students refused to room with the student for the senior class trip to New York, causing him to miss it instead and stay home. Ironically, this student helped plan the trip in his role as class officer.

This is the darker side of an athlete’s coming out story, and shows how traumatizing being outed is as opposed to coming out willingly.

According to the filing, all of these events led the student to become depressed and unable to concentrate on his academic work. The lawsuit was filed on June 6, seeking unspecified damages to compensate for the teen’s “emotional distress and psychological damage.”

Fairless is still searching for a new basketball coach. A good place to start would be one who believes that all of his players are human beings.