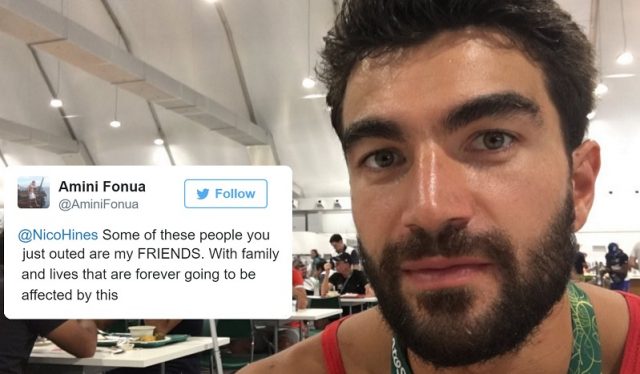 Openly gay Tongan athlete Amini Fonua issued a sharp condemnation on Thursday to a horribly irresponsible and exploitative Daily Beast story on athletes’ use of sex apps in Rio that might have outed gay athletes.

As an out gay athlete from a country that is still very homophobic, @thedailybeast ought to be ashamed #deplorable https://t.co/qzS9rDFJwx

@NicoHines You fucking disgust me. Do you realize how many people's lives you just ruined without any good reason but clickbait journalism?

@NicoHines Some of these people you just outed are my FRIENDS. With family and lives that are forever going to be affected by this

@NicoHines Seriously fuck off with your str8 white male privilege preying on closeted people who can’t live in their truth yet. U ruin us

@thedailybeast & @NicoHines don’t realize this drags us gays in sports back 10 steps. You invaded both privacy & people’s truth. Fuck you!!!

@NicoHines & @thedailybeast 1 of the guys you just outed is only 18 years old… I was 18 once & nowhere near ready to come out, fuck you.

No straight person will ever know the pain of revealing your truth, to take that away is just… I can't. It literally brings me to tears ??

It is still illegal to be gay in Tonga, and while I'm strong enough to be me in front of the world, not everybody else is. Respect that.

Hines, who is married to a woman and is a father, downloaded Grindr to entrap multiple LGBT athletes who were looking to have sex in the Rio Olympic Village so he could “report” about their Grindr usage for The Daily Beast.

He included the heights, weights and countries of origin of several athletes whom he claims to have arranged dates with in the piece.

MIC.com’s Mathew Rodriguez notes that one of the athletes Hines endangered was an Olympian from Central Asia, a region in which LGBT people are “marginalized, criminalized, and are exposed to high levels of violence, harassment and discrimination,” according to one U.S. congressman’s testimony.

In this pseudo-ethnographic piece, Hines has failed at meeting one of journalism’s central tenets. For reference, the Society of Professional Journalists’ code of ethics has an entire section on “minimizing harm.” In it, SPJ says, “Ethical journalism treats sources, subjects, colleagues and members of the public as human beings deserving of respect.” …

Hines chose to use “surreptitious methods,” but delivered no vital information in this article. His piece doesn’t respect his subjects: It mocks gay people and treats them like zoo animals behind a glass barrier.