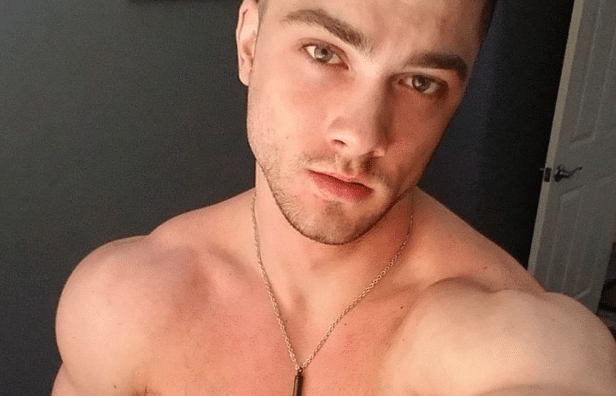 After first asking his fans to guess his sexuality via a Twitter poll, he revealed the answer.

‘You asked, now here’s the answer! I don’t like to label myself, however if I had to say for certain, I’m bisexual with a preference for women. I am sexually attracted to men, but I have yet to experience love for another man like I have had for a woman.’

You asked, now here's the answer! I don't like to label myself, however if I had to say for certain, I'm bisexual with a preference for women. I am sexually attracted to men, but I have yet to experience love for another man like I have had for a woman. https://t.co/bk5Ec3Rgcm

Simpson went on to say: ‘That being said, I HAVE had relations with a man outside of work and, in fact, am searching for my next partner. I prefer a high level of muscularity; clean cut with tasteful tattoos and a huge cock!’

Simpson is a regular performer on gay adult website Gay Hoopla. He went on to recall a special memory he had of being in love with a woman.

‘2 years ago tonight was the first time I had ever fallen in love. I ran her a an Epsom salt bath with lavender and vanilla. I shaved her legs, then jumped in the tub with her, holding her close and telling her how much she meant to me.

‘Then we decided to play catch with the football at night, which could have gone very wrong but went oh so right. The ball landed in the fenced off pool. Being adventurous, the two of us, we quickly hopped the fence.

‘Then I turned on the massive pool night lights, emanating from the bottom and sides of the pool. We went skinny dipping. Seeing her under the glow of the faded pool lights illuminated her with a golden hue, I held her close to me and told her how much she meant to me.

‘It was from that very moment, the very next eye contact, that we knew were completely, without a doubt, in love. And then we kissed, like we had a thousand times before but this one was different; it was invigorating, truly passionate, and spontaneously perfect.

‘This could just as easily happen to me with a man, and I’m very curious to see what, the real aspect of having a male partner is like. Not just a fuck buddy!

He went on to say: ‘Real, genuine love knows no bounds and it knows NO RACES, NO SEXUAL ORIENTATION, NO GENDER, and NO LIES. I’m completely open and honest with my fans at all times.’