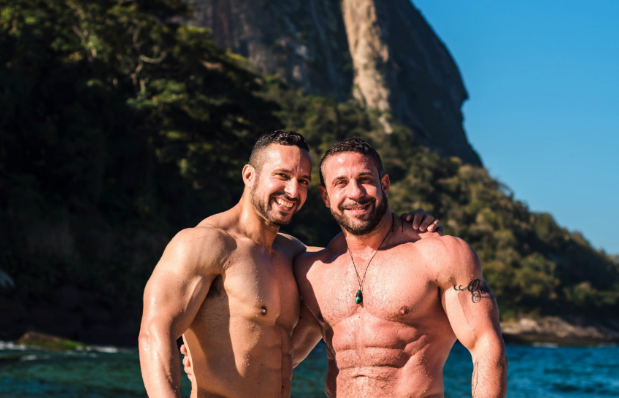 Oh, and Freddi is now a math lecturer. That definitely blows Shrek out of the water.

Freddi told Gay Star News all about his honeymoon: ‘First we went to Buenos Aires, Argentina, where Gustavo’s family lives. Gustavo’s mother, father and sister came to Italy for our wedding.

‘Our wedding was everywhere on Italian media, therefore we were very busy and we didn’t have the chance to talk much with his family before they went back to Argentina. So it was nice to spend a few days at their place and chat about the wedding and all the exciting things that happened.’

Their wedding aired on Channel 5 – the most popular television station in Italy – in May 2018.

You may recognize Freddi. He made international headlines in 2017 when his students discovered their lecturer had history as an adult actor.

‘After that we went to Rio de Janeiro, Brazil,’ Freddi continued.

‘We did everything a tourist should do there and went to all the most beautiful places. As a special treat, we rented a helicopter and had a long tour of the city, drinking Champagne and cuddling. It was very romantic.’

When Freddi first saw his future-husband, he asked producers if they could shoot a scene together. A month later it happened – though they hooked up the night before. The chemistry was undeniable.

‘On the other hand, when we first met I lived in Italy and he lived in San Francisco. So if we had a different job we wouldn’t have had either the money nor the time to be together.

‘After a few years we grew up and we felt ready to move on and quit that job. When that happened, we were happy to turn our relation into a traditional jealousy-based Italian-style relationship.’

Despite all the media attention and the civil partnership (same-sex marriage is not legal in Italy), Freddi says his relationship has largely remained unchanged.

‘Having such a big public commitment and having our relationship legitimatized legally made us fully aware that now we are a family, we are fully entitled to live our love publicly and privately.

‘Though I still feel a skip in my heart when I book a hotel, a restaurant or a show and I ask for two seats, one for me and one for my husband. I love to use that word: my husband.’