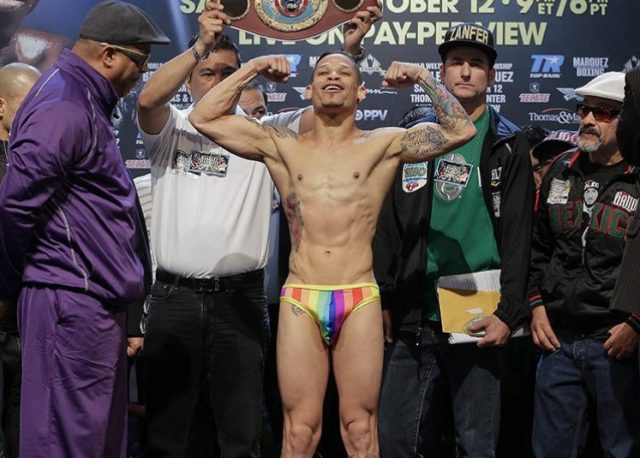 Orlando Cruz, the fifth ranked boxer in the world, had four friends that died in the June 12 shooting.

Orlando Cruz, the first openly gay boxer, will be dedicating his upcoming July 15 fight to the victims of the Pulse shooting in Orlando, which claimed the lives of 49 people.

Cruz, who lives in Puerto Rico with his partner, had four friends who died in the tragedy. “At first, I was sad,” Cruz told the Orlando Sentinel of his reaction to the shooting. “Second, angry. I am very angry because people are homophobic, so they attacked my community. They attacked me.”

On June 12, a lone shooter opened fire on the Florida gay bar, now home to the deadliest mass shooting in U.S. history. During the July 15 fight in Kissimmee, Florida, Cruz will ring 10 bells to honor the Orlando victims and their families. The fighter has also said that his outfit will pay “homage” to those lost.

His upcoming match represents a homecoming for Cruz. Cruz, currently the fifth ranked boxer in the world and the reigning champ in the super featherweight division, came out in 2013 prior to a bout in Kissimmee.

“I decided to be free,” he told The Guardian, adding: “They can call me maricón, or faggot, and I don’t care. Let them say it because they can’t hurt me now. I am relaxed. I feel so happy. But to make this announcement to the whole world I had to be very strong. … I am proud to be Puerto Rican, just like I am proud to be a gay man.”

Two years ago, Cruz explained that he had previously lost friends to antigay violence. “I lost one friend who was murdered by people who hated gay men,” he said. “I was very angry then because homophobia ended his life in the most violent way.”

Cruz, who couldn’t attend the victims’ funerals because of training camp, had a scheduled visit to Pulse on Tuesday. The boxer brought gloves and flowers to honor his friends lost, as Fight News reported.