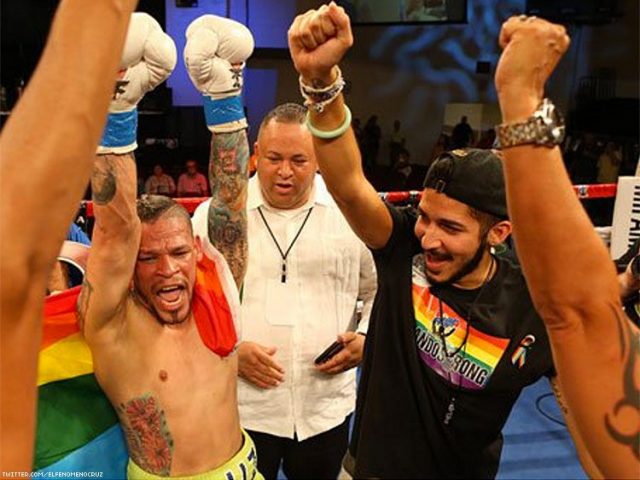 Cruz, who lost four friends in the June 12 attack, was cheered on by survivors and their families.

Orlando Cruz, the openly gay boxer who dedicated his June 15 fight to the victims of the Orlando shooting, won the bout.

Cruz faced Alejandro “Alex” Valdez, who was returning to the ring for the second time after a four-year hiatus. Although Cruz, who is currently ranked in the world, faced tough competition from his opponent, a former bantamweight fighter, he took Valdez out at the 1:24 mark of the seventh round.

Prior to the match, the Kissimmee Civic Center — where the event was held — rang a bell for each of the lives lost during the attack on Pulse nightclub. The deadliest mass shooting in U.S. history, 49 people were killed when a lone gunman opened fire on the Florida gay bar.

On Friday, many of the survivors and their families were in the audience to watch Cruz fight.

Cruz, who lives in his native Puerto Rico with his partner, but has called Florida a second home, had four friends that died in the tragedy. He said it was an honor to fight for them.

“It was a great opportunity to get the win and represent my people,” Cruz told the Sentinel. “I’m proud to give them an equal opportunity to compete. It meant a lot to get this win tonight, because it provides the opportunity for a world title.”

A former Olympian, Cruz came out in 2012 before a match in Kissimmee, and Friday’s fight was his first in the city since.

“I don’t want to hide any of my identities,” he stated in a press release four years ago. “I want people to look at me for the human being that I am. I am a professional sportsman that always brings his best to the ring. I want for people to continue to see me for my boxing skills, my character, my sportsmanship.”

Since then, Cruz has become the only gay fighter in boxing. Even before the match, he used his visibility to raise awareness about antigay violence. During the weigh-in, Cruz sported a rainbow speedo, and on Friday, he added a tattoo of a memorial ribbon honoring the victims.

Cruz said that hope by being out and proud, he can help make the world more accepting.

“I want people to be more friendly, that people accept the community of LGBT,” Cruz told The Guardian. “The people change their attitude, and the people love. People are the same. Gay, straight, whatever.”