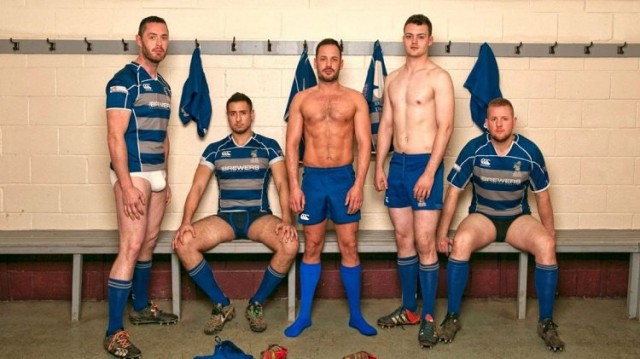 Uk’s first rugby team was founded 20 years ago and these days they are celebrating two decades of proudly being gay and playing rugby. To mark their anniversary the team posed for a book that will be published by Meat Magazine.

The founder of Meat magazine, Adrian Lourie want to send a message out there with this book. As he is “tired of the body shaming that goes on within the gay community.” The book will “celebrate the bodies of ‘ordinary gay men’.”

“I see myself as a pretty average looking-dude so I don’t really see myself as a pin-up anything,” Christopher Kang, 1st XC player of The Kings Cross Steelers said. “So I’m chuffed that I’ve had the good fortune of joining a long line of Meat magazine dudes alongside so many of my fellow Steelers. The Steelers has not only helped pave the way for inclusive rugby teams but also helped hanged perceptions about gay sportsmen.”

“Despite so much progress over the last 20 years, it can still be very difficult to be an out gay man, made even more so by a lot of unhelpful noise around how to be, act or look within the community. That’s why I’m proud that the Kings Cross Steelers have partnered with Meat to help show that anyone can be a pin-up by simply being yourself,” the Chairman of the Kings Cross Steelers said.

He continued adding that the club has been a major support for men.

“For two decades, our club has helped hundreds of men – big, small, gay or straight – realize the great maxim about rugby: that it is a game for people of all shapes and sizes – truly a sport for everyone.”