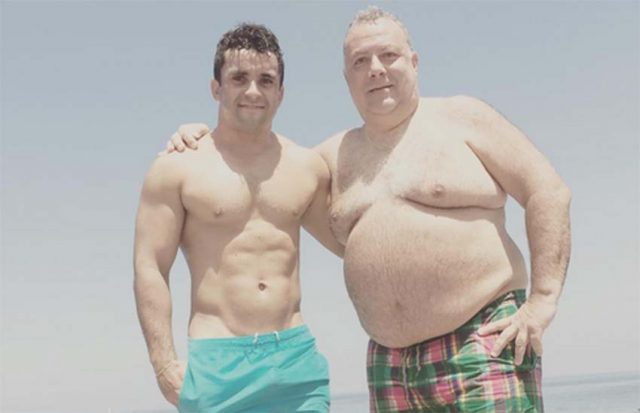 Sam Stanley and Laurence Hicks have just announced their engagement

Gay rugby star Sam Stanley has responded to the trolls who hate on his relationship with an older man.

The first rugby union to come out as gay, he announced his engagement to his partner of seven years Laurence Hicks at the weekend.

In a Facebook post, Stanley wrote: ‘After being a part of each others lives for almost 7 years, Laurence has been my pretend godfather, uncle, cousin and many others in order to make sure no one found out about us and that we were a couple.

‘Funny looking back after having come so far together.

‘The most loving man I know and I’m incredibly happy to say that we’re now engaged.

But with the major announcement on social media, there was a lot of criticism.

‘I’m sure as everyone knows, you’re not doing anything right if you’re not getting criticized in this world,’ he told Attitude.

‘Laurence and I love each other and to us that’s all that matters. We’re proud to represent the many relationships like ours.’

Stanley met Hicks on SilverDaddies.com and they fell in love ‘very quickly’.

‘I’d never had the feelings I felt for him before,’ he said.

‘It was pretty amazing and I’m incredibly lucky to have met him and call him my fiancè.’

One of the new websites will cater to ‘either owned, managed, run, sympathetic to, or understanding of, the LGBT market,’ he said.

After Stanley came out publicly in 2015, Hicks was his biggest support.

In a Instagram post, Stanley wrote: ‘Nothing beats the support he has shown me and I couldn’t be without him.

‘Finding that someone who you would do anything for and who also makes life worthwhile is so incredibly satisfying!

‘Perceptions need to change,’ he added.