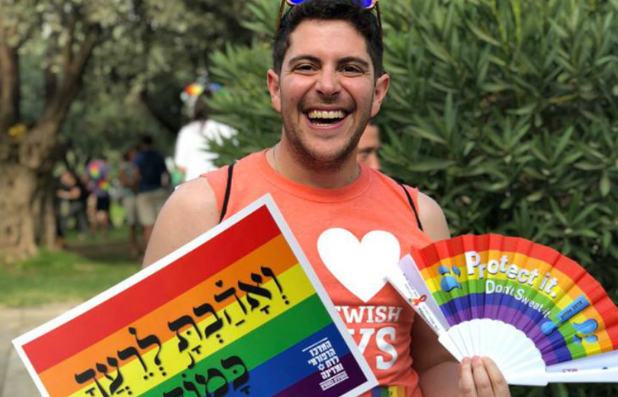 It’s illegal to refuse service due to sexuality in Israel

An American student currently studying at Hebrew Union College in Jersusalem, Israel for the year, is suing a local pizzeria for allegedly refusing to serve him due to his sexuality.

Kanter was in the city a day after Jerusalem Pride in August. He was wearing a t-shirt with rainbow letters spelling out ‘Cincy’. The shirt was for his hometown of Cincinnati, Ohio.

He and some friends went into Ben Yehuda 2 pizzeria when the alleged discrimination took place.

Kanter posted about his experience on Facebook on 3 August.

This is what went down

‘Today, for the first time in my life, I was denied service at a pizza store for being who I am (in Jerusalem),’ he wrote in the post.

According to his recollection, when he approached the counter to order, the employee said: ‘Atah homo (are you gay)?’

‘I said yes. He said “out” and pointed at the door. My jaw dropped, and he instructed my classmates and I to leave.’

Kanter further explained he grew up ‘being told Israel was the place where Jews could feel always feel at home, a country that lived our Jewish values, and a place that was a worldwide leader in LGBTQ rights’.

The day before at Pride, Kanter described ‘security as if the President was coming’.

The post goes on to explain various anti-LGBTI policies and sentiments in the country, including rabbis calling gay people ‘perverts’.

‘So tonight as Shabbat comes in, I’m struggling to find hope for this land. I’ve spent years promoting how wonderful it is, yet I can’t today.

‘My hope tonight, as I light Shabbat candles, is in the 52 other Jewish leaders I currently study with, hoping to make the world a better place. And the 80,000 Israelis who marched for gay rights last week.’

In Israel, it’s illegal to refuse people service based on their sexual orientation.

According to the Times of Israel, Kanter is suing the establishment for NIS 33,500, or about $9,100. The Israel Religious Action Center is aiding Kanter with his legal battle.

The owner of the pizzeria also reportedly said if the allegations were true, he’d fire the employee. Later, however, he contracted himself and said the incident was likely a misunderstanding and that the employee was trying to close the store.

The case is scheduled for 31 January.

Gay Couple Threatened With Being Kicked Out Of Pizzeria For Kissing