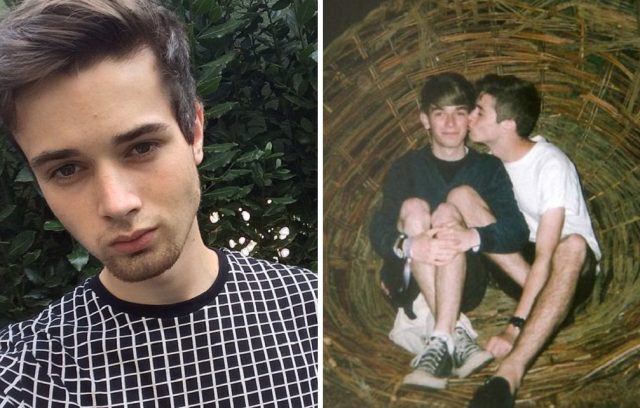 “I’m talking, because I know it’s the right thing to do.”

It’s a sad fact that male rape is one of the UK’s most under-reported crimes, and one that remains shrouded in stigma and secrecy. Now, one teenager has decided to cut through the silence and share his own story and shed light on the still-taboo subject of male sexual abuse.

Dean Eastmond was just 16 years old and still in the closet when he was raped by someone he knew well and considered a friend, and now, three years later, has recounted the trauma he suffered – and continues to suffer – to help raise awareness and encourage better reporting of such crimes. Read Dean’s story in his own words below:

Rapist. It’s a word that, even years later, seems too dirty to say. Rapist. The two syllables that I have replaced his name with. Rapist. The man who fucked with my head more than any part of my body.

I was 16 years old. The 2012 Olympic games were taking place in London. My quaint little hometown of Weymouth hosted the sailing events, and I ended up as an Olympic attendant, serving food to athletes and their crews. Not a bad first job, I guess.

Sixteen is an awkward age for anyone, let alone those within the LGBT community. Having to deal with all the spots and hormones is hard enough without also having to come to terms with your sexuality.

While working in Weymouth, I befriended a guy a couple of years older than me. We used to get the same bus into work each morning. He looked and acted like a nice enough guy. He was always smiling, and popular with our other colleagues. As a shy and closeted teenager, I looked up to him as a friend.

We were both working a later shift when he asked if he could come round beforehand for an hour or two. He was my friend; I said yes. Before I knew it, my trousers had been pulled down and he was on top of me. All I remember is the pain, and my vision becoming blurred by the intense fear that swept over me.

It was my first ever sexual encounter.

I left the house to go to work, but he stayed inside my room. I was terrified at the thought of still finding him in my room when I got back from my shift. This was a nightmare that haunted me for weeks after: walking into my bedroom at any time, and finding the man who raped me sitting there.

Typing about what happened still feels me with an indistinguishable sense of fear, doubt, worthlessness and discomfort.

I was trapped within what my rapist had done, and unable to reach out to anyone for help. I thought I’d be outed as gay and rejected. I know this sounds silly. But it was what I thought, and I know it’s the same for others who have been sexually abused. Since the incident, I’ve had to overcome a number of mental health issues, all of which inextricably link back to that day.

I know people who’ve been subjected to similar incidents. They’ve been drugged by their best friends, forced to have unprotected sex with their former significant other, tricked during a one night stand. I could go on.

Consent couldn’t be easier to understand. No means no. So why do people still ignore it?

Rape goes far beyond just saying ‘no’, especially within the gay community. Many times there is no chance to say ‘no’, whether out of fear, shock or politeness. It’s important to understand that by not denying consent we are by no means providing it. Too often unwanted persistence and one-sided lusting, amplified by the sexual pressures within the LGBT community, blur distortions between what is and is not consent. Embedded in many who use hook-up apps, rapists justify their actions and lessen the act of rape by assuming consent by a lack of their victim saying ‘no’.

Since speaking out about my experience, hundreds of friends and strangers alike have contacted me over social media telling me their stories. Hearing that such horrible things have happened to other people just like me was strangely unnerving yet reassuring at the same time.

According to Rape Crisis, 12,000 men are raped in England and Wales every year. For women this number is a shocking 85,000, and needs to be tackled with the greatest urgency. While this is happening, we should make sure that we’re addressing the issue of male rape too. Only 15 per cent of women report their sexual attacks, yet this remains significantly higher than male victims.

Survivors UK believe that 97-98 per cent of men don’t report what happened to them – and I’m included in that figure. Unless such issues are spoken about and understood more, I doubt this statistic will ever change.

In writing about this, I’m coming to terms with what happened to me for the first time. I’m talking, because I know it’s the right thing to do. No one should let their experiences rot away within themselves.

No means no, no will continue to mean no – and male rape needs to be spoken about, urgently.

Dean Eastmond is a London-based journalist and co-founding editor of Flazéda magazine. You can follow him on Twitter @deanvictorr.