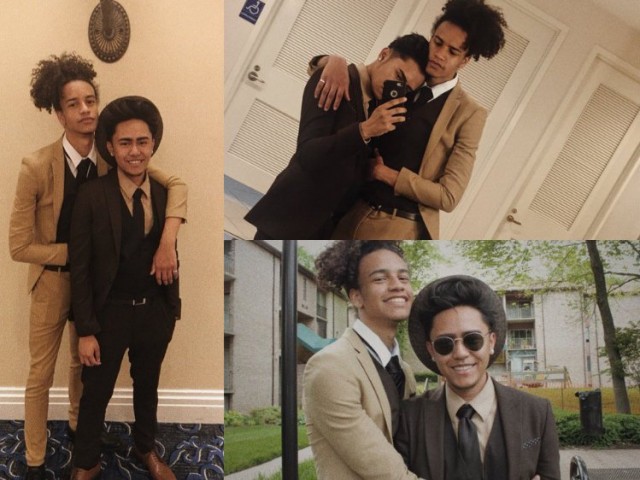 Myren is a high-school student who, despite his parents’ disapproval, he took his boyfriend to the prom. And that was the best decision he’d ever made. No one supported him, but Myren posted photos from the prom alongside his boyfriend, and he got a lot of support from social media.

My parents told me I couldn't go to prom because I wanted to go with my boyfriend so I had to go behind their backs? pic.twitter.com/XnnI0Pk0Vd

“They wanted me to end things with him and they tried grounding me to keep us from talking, but no matter what we found a way to talk,” the 17-year-old said. “My parents won’t let me see him. It’s like I’m already living on punishment, so what do I have to lose by going to prom?”

His parents found out he was bisexual when they read a text message on his phone sent by his boyfriend, and they didn’t agree with what they’d found out.

Even if going to prom with his boyfriend seemed like a bad decision, Myren didn’t really care about other’s opinion. He followed his heard and had the time of his life.

“Everyone’s mom was standing there taking pictures of their kids, talking about how beautiful they looked and how they were so proud of them,” he said. “I imagined what my mom would have looked like taking pictures of me in my suit. Everyone at the send-off was a stranger to me except my boyfriend. None of his family came to his send-off either.”

Maybe his mom was not there but thousand of people sent likes  and encouraging messages on Twitter.

“I was surprised when I noticed that people were proud of me and that they respected the decision I had made,” Myren said. “I didn’t invest so much in prom for people’s opinions, I did it to have a great night with my boyfriend.”

7 Months With My Boy ??? pic.twitter.com/otHSpNKPtI

Myren was emotionally touched when dancing with his boyfriend and cried tears of joy, because he’s never thought he could take his love to the prom but he did it!

“When we were dancing together I teared up some because there were times where I never thought we would go to prom,” Myren added, “but there we were.”

These guys seriously inspired a lot of people who had similar experiences of their own. One girl tweeted that she has to skip her prom because her mom won’t let her go with her girlfriend.

Same. My mom wouldn't let me go with my gf .. I didn't get a chance to go to my senior prom? https://t.co/FLHMow0SoO

Others had to lie to their parents.

Same. Except I told them that they were just my friend https://t.co/N7suZUA7LO

Even one dad reached out with the sweetest comment ever.

@myrenthapimp As a dad, can I say that I hope my kids grow up to be as strong and true as you. Bravo to you. Also, you look fantastic.

Of course, there were also some homophobic comments as well.

Anyways, just wanna thank everyone for the support. It's comforting to know that this world is becoming a better place.

And if you still homophobic in 2016, I don't know what to tell you fam. You got a big storm coming.