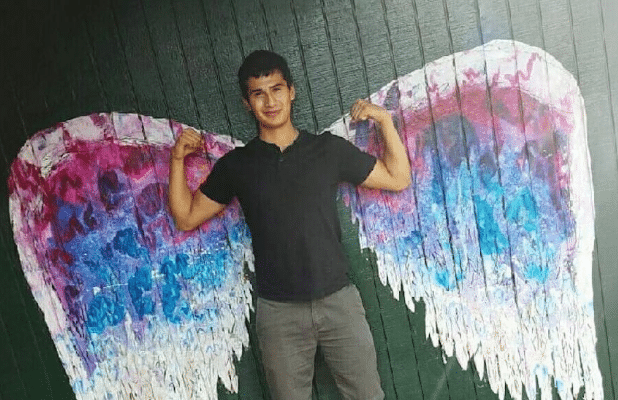 Aaron Salazar’s family believes the attack was a hate crime, but Amtrak officials are claiming it may have been a suicide attempt

Aaron Salazar was taking the train from his home in Colorado back to his school’s campus in Oregon on 15 May. On the way, he had a 10-hour layover in California. Salazar decided to stay with a friend he had made on the journey, and texted this to his grandmother upon arriving in California. An hour later, he was found bloody, beaten, and burned at the Amtrak station in Truckee.

As of Tuesday, 22 May, a week after the attack, Salazar was still in a coma at a Reno, Nevada hospital. According to Fox40, Salazar is suffering from a broken pelvis and damaged brain stem. It is unclear if he will suffer permanent brain damage.

‘It broke my heart. He did not look like Aaron at all,’ Salazar’s cousin, Sonia Trujillo, told Fox40. ‘His face was beaten. He was swollen.’

Salazar’s family believes this attack to be a hate crime.

‘The burns on his leg were horrifying. It did not look like him at all,’ Trujillo said. ‘I believe it was something deeper because the burn marks. Why burn somebody? If you’re gonna hurt somebody, hurt them. But why are you gonna burn somebody?’

The family claims Amtrak won’t talk to them about the incident. In fact, Amtrak officials have even tried to convince the family it was a suicide attempt.

‘They’ve been shady about the whole investigative process,’ Salazar’s cousin, Austin Sailas told HuffPo. ‘They won’t even tell us where he was found, other than it is private property. They’re just saying that they’re looking into the idea that he jumped from a moving train.’

‘Something happened there. You can’t say a kid, you know, jumped out of a train or fell out of a train and this kid does not have no injuries consistent with a train going 60 to 70 miles an hour. No damage to his clothes. There’s not a scratch on his arms or his legs, and you’re flying out of a train? It makes no sense to me. I honestly believe that he was beaten,’ Trujillo said.

On 22 May, Amtrak issued the following statement to Fox40:

Other visitors of Truckee, California were shocked to learn the news of Salazar’s attack.

‘If somebody knows something, they should step forward and help to find out exactly what happened, who caused it to happen and how we can prevent it from happening again,’ said Truckee visitor Jim Clark.

Salazar’s family is remaining faithful. His mother set up a vigil by his hospital bed. They even set up a GoFundMe campaign to help with his medical costs.

‘This kind soul who has never hurt anyone, and has only spread positivity and love was beaten and left by the railroad for dead,’ the GoFundMe page reads.

‘He was taken to the hospital and is currently fighting for his life with multiple injuries including a multiple brain injuries, a broken pelvis, and severe burns on his thighs. Our family has come from across the nation to support him and are currently in need of aid to pay for living costs and Aaron’s medical costs. Although we appreciate prayers as well any donations would be greatly appreciated. This young man does not deserve the horrible things that happened to him, but he is fighting for his life and needs our help and positive vibes.’

Salazar’s family is using the hashtag #JusticeForAaron to garner awareness for the incident and any information about the attacker.