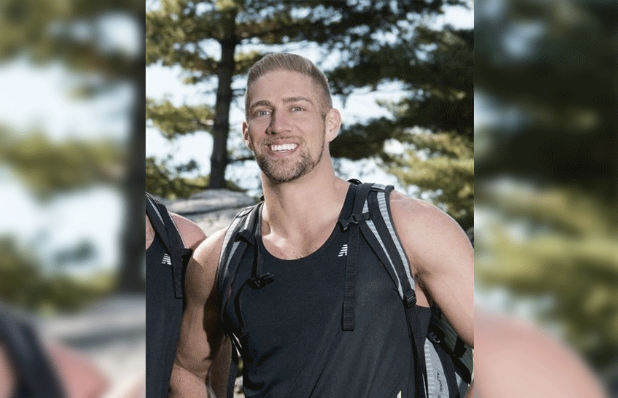 ‘Glad it’s not my relative’s grave you’re standing on to suck in your stomach and get likes’ says critic of Chris Marchant, of string quartet Well-Strung

A gay violinist has defended himself against backlash after sharing a topless photo from a Provincetown graveyard, before deleting the photo.

Chris Marchant, a member of all-gay string quartet Well-Strung, posted the image of himself [below, right] resting against an obelisk on Saturday.

Well-Strung are a pop-classical band who perform covers of music by the likes of Madonna and Beethoven.

He was publicising a brewery in the Massachusetts coastal town, which is particularly popular with LGBTI people. 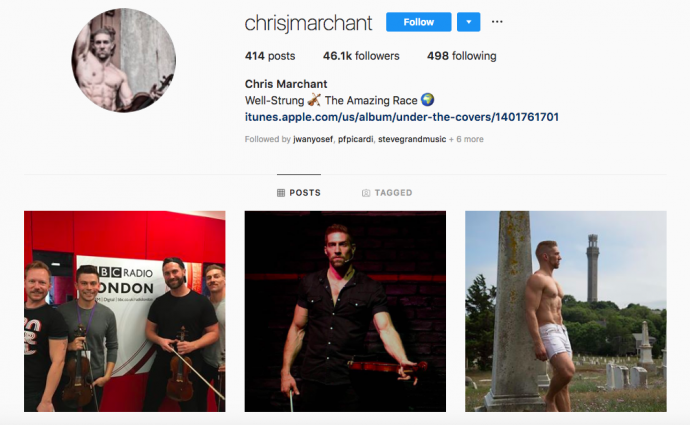 He shared the photograph along with the caption: ‘Can’t wait to get back to Ptown for Halloween and to help with the launch weekend of @ptownbrewingco!’, referring to Provincetown Brewing Company (PBC).

The picture, taken in Provincetown Cemetery, features the famous Pilgrim Monument in the background.

While the pic received over 5k likes and some positive comments (including ‘sexy’ and ‘you are beautiful’), some of his followers were not impressed.

Responses ranged from ‘who’s [sic] name is on the tomb you’re standing on?’ and ‘somebody wasn’t buried there for you take an abs pic’.

Another said: ‘Wow. I’m glad that it’s not my relatives [sic] grave you’re standing on to suck in your stomach and get likes on Instagram. Christ. When narcissism knows no limits. Absolute lack of thought for anyone else except yourself. Unfollowing.’

‘The photographer wanted to capture the moment’
Responding to his critics, Marchant defended his decision to post the photo: ‘My abs aren’t the point,’ he commented back. ‘I’m willing to bet that anybody buried in Provincetown would be happy to support the kind of activism that PBC is going to fuse into its business. I might be wrong, but I’m willing to take the bet.’

He also added: ‘I mean zero disrespect to anybody in Provincetown, living or dead; anybody who knows me knows that. I lived next to the graveyard last summer and often walked through the paths and graves; the photographer wanted to capture that moment.

‘I don’t see why standing next to or on a stone that represents someone’s life and death equals disrespect. Peace and love to y’all.’

‘Unfollowing and moving on’

Responding to Chris, a follower said: ‘Posting a half naked pic in a graveyard to promote a beer company that promotes activism [sic] my head hurts from the mental gymnastics you have to do to get there. Unfollowing and moving on.’

Beautiful time spent in Banff! Somebody bring us back to Canada asap ?

On its website, the brewery in question states of its activism: ‘Each PBC product will highlight a cause or organization we care about: from LGBTQ+ rights to conservation and more, charities will receive a percentage of sales from each product sold. People from far and wide come to Provincetown and love it for its unique character. PBC will be the taste that takes you back to Provincetown all year round.’

Chris and boyfriend/bandmate Trevor Wadleigh were both contestants on CBS show The Amazing Race last year.

It is not the first time a public figure has gotten into trouble for an ill-advised photo op. In August, YouTuber Alfie Deyes caused controversy when he posed for a picture sitting on a monument to AIDS victims in Brighton, England.

Furthermore, last year, a gay couple were arrested for mooning at a temple in Bangkok, Thailand.

After Gay Star News approached Provincetown Brewing Company and a representative for Well-Strung for comment, Chris deleted the picture.