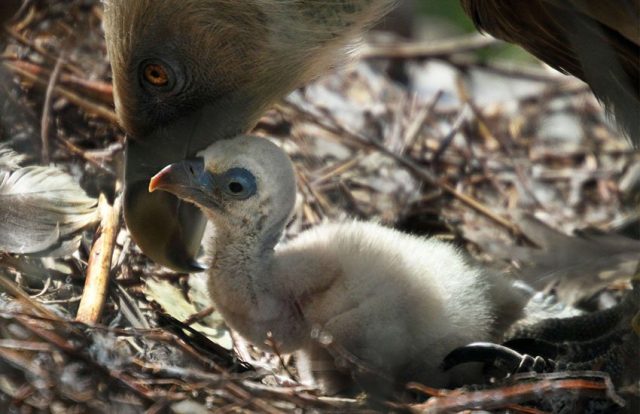 Two male griffon vultures have adopted an egg and are now raising a chick together in a Amsterdam zoo.

Artis Zoo said keepers had found an abandoned egg on the vulture aviary initially put it in an incubator and later decided to place it in a nest two male birds had build together.

This is the first time a same-sex pair have hatched an egg at the Dutch capital’s zoo.

The couple, who we’ll call Bram and Arne, are disabled – are unable to fly and were originally brought to the zoo in 2010.
Forming a connection when they first met, Bram and Arne have been virtually inseparable ever since.

When the keepers placed it in the nest, Bram and Arne took it in turns to sitting on the egg until it hatched two months later.

And now, the new dads are taking care of the chick by feeding it regurgitated food.

‘This is not uncommon in the animal kingdom: there are regular homosexual couples – especially among birds,’ the Artis Zoo spokesperson said in a statement.

‘The two fathers have been good for the chick.’