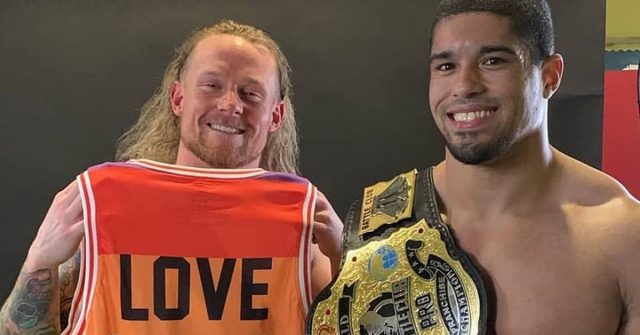 History was made under the New York sky on Friday night when out gay pro wrestler Anthony Bowens became the first Battle Club Pro Franchise champion.

The big win came in the main event of Battle Club Pro’s first outdoor event, Unfinished Business. Draped in a rainbow tank top adorned with the phrases “Team Pride” and “Love Wins”, the “Five-Tool Player” entered the BCP ring to take on four other men for the newly created title.

The match was hard fought and chaotic, but Bowens battled back from being thrown off a ten foot concrete pillar to the floor to capture the title. He certainly lived up to his one rule: prove them wrong.

The timing of the win was picture perfect as well. Bowens, who previously identified as bisexual, kicked off 2019 by coming out as gay. His rise to the BCP Franchise championship came one week before New York City Pride kicks off its festivities. “I’m going to keep fighting for change and I hope you will too,” Bowens tweeted.

His victory felt like an unofficial kickoff those events in a way, as emotion swept some LGBTQ audience members while celebrating the win. “Macintosh was seconds away from breaking up a pin but @Bowens_Official sneaks in a Pride month victory and I’m IN TEARS,” wrote Eric Shorey, better known as DJ Accident Report, one third of prominent LGBTQ wrestling YouTubers, The Nobodies.

Bowens also got a shoutout from his boyfriend, Michael Pavano.

Bowens now has another rule to add to his catchphrase. Love wins, and so does Bowens.