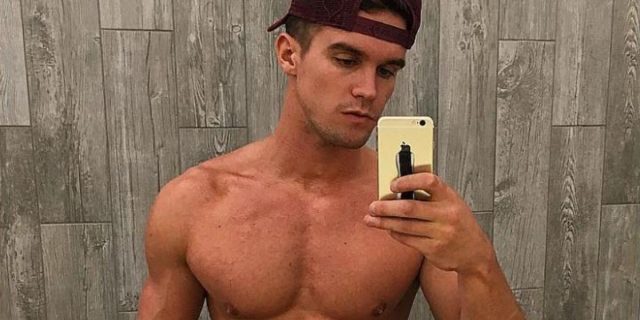 In an opinion piece for the Daily Star, the reality TV personality condemned homophobia in sport, particularly football, and questioned why gay players don’t feel comfortable or safe enough to come out in 2016.

He wrote: “If you are happy enough to let your balls slap against another lad, then think about having the balls to admit it and help stamp out homophobia in the beautiful game.

“Yes, private life is private, I know that. But what fucking misery it must be to live a lie. You can only do something about a shit situation if you stand up against it and challenge it head on (no pun intended).

“As a football fan, it makes me cringe to think that football fans would hurl anti-gay abuse at a player. Would they do it on the street if they saw a gay guy? Hopefully not. Mind you, some cunts would.”

While he made it clear that no one should be “forced to come out” before they’re ready, he pointed to Geordie Shore co-star Nathan Henry as an example of a public figure coming out and receiving a positive response.

He continued: “Nathan coming out only made our Geordie Shore family tighter. But none of the lads in the house are taking the piss out of Nathan for his sexuality.

“We don’t make him sleep in the girl’s room as we think he wants a piece of our arses. We don’t make jokes about not turning our backs on him. None of us avoid walking around in our underwear in front of him, in case he wants to cop a feel of the parsnip.

“Why? Because we’re not cunts.”

How do you even get eyebrows like that…. Bothered I am all natural… So fuck you @nathanhgshore ????

Gaz’s comments come amid growing dismay at the level of homophobia that still exists in sport, and questions over why there are no openly gay or bi Premiere League footballers currently playing.

Earlier this month, the chairman of the Football Association said he feared that a professional football player would face “significant abuse” if they were to come out, despite recent advancements in LGBT rights.

Meanwhile, in September, a study from LGBT charity Stonewall found that 72% of football fans have heard homophobic abuse at matches, and one in five 18-24 year olds would be embarrassed if their favourite player came out.