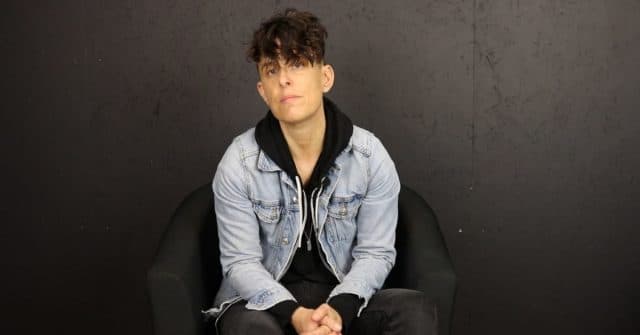 Genderqueer poet Andrea Gibson is an award-winning spoken-word artist as well as an LGBT+ activist.

Through their poems, they explore gender, love, sexuality and politics. They are also a four-time Denver Grand Slam Champion.

Gibson recently released a book co-written with Megan Falley entitled How Poetry Can Change Your Heart.

While on their Lord of the Butterflies UK tour, Gibson told PinkNews that they feel like “for the last couple of years, you look out in the world and it looks like everything is getting worse.”

“I personally think that we need to constantly touch into what has gotten better, to have fuel to change the things that have not.

“I believe in the power of the truth, especially in the US right now, we are living in a time when not much truth is being told by the current administration.”

They added: “A lot of my poetry addresses very big issues.”

“First Love” is a poem addressed to Gibson’s own first love called Mandy. They talk about how they met, what they brought to each other and how they felt in a heteronormative society.

Gibson said that the poem “is about the first time I fell in love with a woman and I wrote it specifically so that I could honour something changing for the better.

“As a social justice poet I’m writing lots of poems that can be, actually, pretty excruciating to write and dive into but I have to write those poems because the world is what it is.

“But if I had my way, I would write love poems all the time.”

However, they also added: “Writing a queer love poem, unfortunately, is political in its own way.”

“Just to be writing a love poem to a woman is sort of heartbreaking that it is political.”

“The first time somebody said ‘genderqueer’ to me, I felt like my world had just flown open because I could see a future for myself,” they said.

“It was at once exciting and scary.

“I think I knew gender before I knew my sexuality.

“I’m living outside of the constructs of what we have been prescribed from birth essentially. Identifying myself as who I am, continually becoming.”

They said that people did not always accept their pronouns.

“Particularly in the literary community, where people are trying to say that it’s not correct grammar and prioritising some story of grammar over honouring people’s identities.”

“But I’ve generally had a positive experience,” they said. “Language and gender are so interconnected.”

“The more I come into my own queerness, I think the more I’m experimenting with the boundaries of language.”

“You know, noun and verbs and such, it feels like a very queer thing to be doing.

Andra Gibson will be performing at Union Chapel in London on May 23.