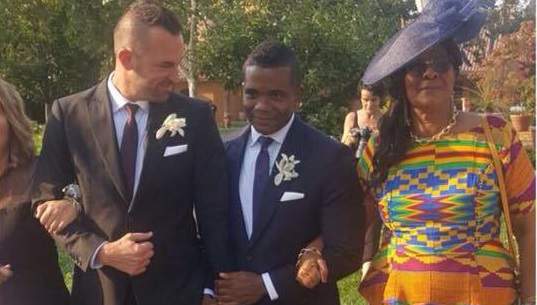 The Ghanaian internet is currently heating up because of a gay wedding that happened… in America.

Stephen Kabutey Ofoi Ceasar (or Stephen Anertey Caesar as some media outlets are reporting) is a Ghanaian born man. He went to, and was a prefect (class leader) at, the Achimota (Motown) School in Accra, which boasts itself as a prominent British styled school that has bred future Ghanaian and Zimbabwean presidents as well as Nigerian governors.

After that, Ceasar reportedly lived in Mataheko, a suburb of Ghana’s capital city Accra, and yen.com.gh reports that he then went on to become a tv show host for Smash TV and entertainment program on Metro TV.

But it was Ceasar’s latest accomplishment that is getting the people’s attention and that is the fact that he got married… to a man.

Stephen Ceasar moved to the United States of America to get married to his now husband Ryan Lathrum. The two got married in Sonoma Valley, California with their families and some of Ceasar’s schoolmates present.

The problem is that footage and video of the event have gone online and Ghana has gotten wind of it. And several people are not happy about the event.

While most of these hateful remarks are just people shouting out into the void of the internet, there is one man trying to lead the charge to actually attack and affect Stephen Ceasar.

Dr Maurice Ampaw is a controversial Ghanaian lawyer who is trying to make sure that Ceasar can never walk foot on Ghanaian soil again. And he plans to do that by claiming the man is “persona non grata.” 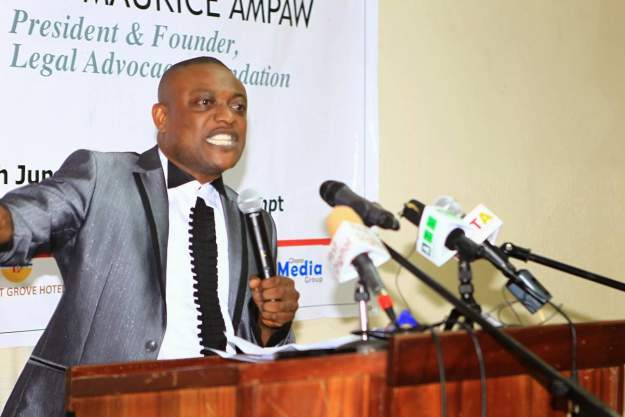 And it seems that Ampaw’s bark isn’t without some bite as he has expressed that desire to connect with government and embassy officials to talk about taking away Caesar’s citizenship.

“He is an illegal person and must not try to enter Ghana,” Ampaw stated, “He even ought to go ahead and denounce his Ghanaian citizenship because we would not allow someone who is gay and has married under gay laws to come and contaminate our people here….”

Stephen Caesar has yet to respond to all the uproar that’s sparked after his wedding.

Nick Gayer
0
*Adds to Pride Month playlist* Kylie Minogue is about to take a bite out of the Big Apple. The Princess of Pop is slated to release...

When My Husband Told Me He Thought He Might Be Gay

Nick Gayer
0
"Maybe I'll find out I'm only 30% gay," Cindy Chupack's husband told her. Sex and the City writer Cindy Chupack has been open about her... 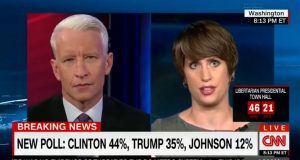 Ervin Brue
0
Donald Trump has ushered in a glorious new political era of people openly not giving a fuck. When you can seemingly say anything with...