“[I’m] proud that slowly the country is changing.”

Next month, the Eurovision Song Contest comes to Kiev, Ukraine, a region not exactly known for being a gay paradise. Maybe that’s why Eurovision producers are redecorating the People’s Friendship Arch in Cross Park with rainbow colors and renaming it “the Arch of Diversity.”

“[I’m] proud that slowly the country is changing,’ said Gennady Kurochka, who runs a publicity company working with European Song Contest in Kiev. “[The arch is] filled with new meaning, a new sense of belonging to a free people—free in thoughts, free in spirit!”

When it’s done, the 200-foot installation will be the biggest manmade rainbow in the world, underscoring Eurovision 2017’s theme of “Celebrate Diversity.”

Liza Kuzemko, an organizer of Kiev Pride, called the installation “a miracle.” In 2015, Kiev Pride had to be disbanded, when violent neo-Nazis violently attacked participants. The 2016 Pride, dubbed the Equality March, went on without incident.

Dedicated to the unification of Russia and Ukraine under the Soviet Union, the monument will go back to its drab, gray appearance after the competition is over. But it will still sport two semi-naked male statues underneath holding hands.

Which, if you ask us, is still pretty gay. 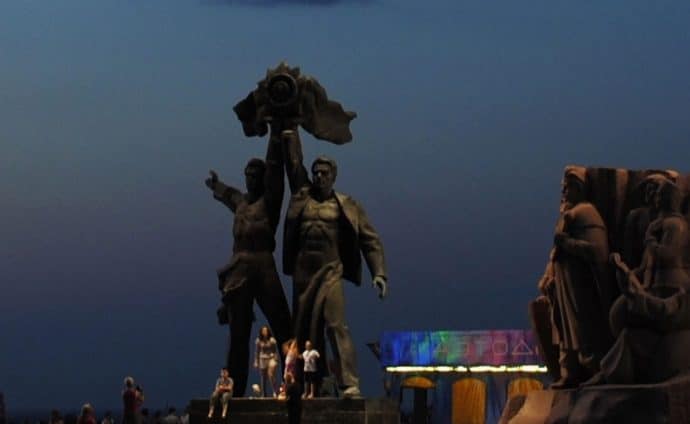 Watch the Eurovision Song Contest finals, May 13 at 3pm ET on Logo.