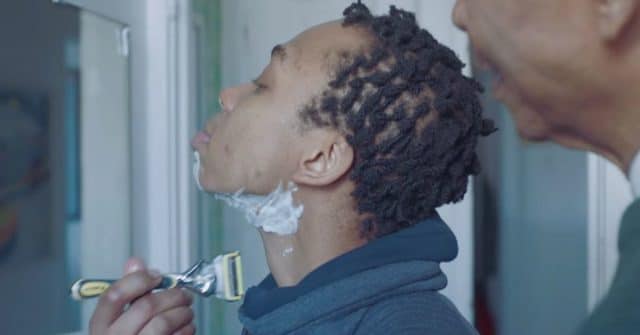 The latest advert from Gillette features a trans man being taught how to shave for the first time by his dad.

The advert, as part of the grooming company’s #MyBestSelf campaign, has already been viewed by over 400k viewers since it was uploaded on Thursday (May 23).

The video sees Samson Bonkeabantu Brown, a young trans teen from Canada, repeat the advice his father has given him on shaving while he proudly looks on.

“I’m glad I’m at the point where I’m able to shave,” he says in Gillette’s ‘First Shave’ video.

“I’m at the point in my manhood where I’m actually happy. It’s not just myself transitioning, it’s everybody around me transitioning.”

The video comes after Gillette has tried to address the different ways that masculinity can be expressed. Changing its slogan from ‘The Best a Man Can Get’ to ‘The Best Men Can Be’, the company challenged toxic masculinity in a viral ad.

In a Facebook post, Brown said that his father had been his greatest supporter throughout his transition and had always encouraged him to “be confident and live authentically as my best self”.

“This moment overwhelmed me during filming and again today seeing the ad since it’s been launched,” he added.

“I’m keenly aware of how blessed I am to be able to exist in this world being supported by my family in ways that all too often many of my trans brother, sisters, and siblings who exist outside the binary are not always as fortunate.

“I am confident that this ad will encourage many of my trans siblings and fill them with the knowledge that our existence in this world can be filled with the love and support we deserve.

“Be good to yourselves. Love yourselves. And know that when you greet the world with love, it can and will love you back, often in the places you least expect.”

Comments on the video praised the company for the ad, with one person saying: “I love this Gillette, thank you! You have no idea how much this means to our family. Representation matters.”

Another person said: “Beautiful ad! Please continue to include transmasculine folks in your advertising, and to support the LGBT community in concrete ways. As a non-binary person, I appreciate this message!”

Gillette commented to say the advert would be shown at Toronto’s Inside Out LGBT Film Festival and that the company was “also committing to ongoing monetary, product, and volunteer support for The 519 – the space for change serving the LGBTQ2S community in Toronto.”