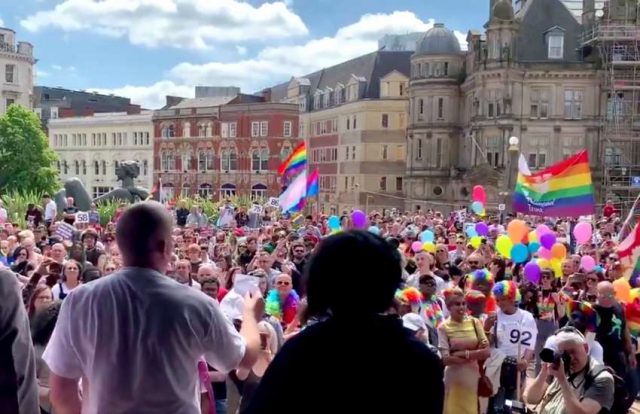 Andrew Moffat, assistant headteacher at Parkfield Community School, read out a beautiful message from one of his supporters, a 10-year-old girl.

In the letter, the girl thanked Moffat and the the school faculty for being so supportive and told them not to ‘give up.’

Moffat was , the city’s annual and always colorful celebration of LGBTI history and lives.

But controversy threatened to color the celebrations. For months, parents, predominantly Muslim, have protested the school over the faculty’s decision to integrate anti-bullying LGBTI teaching materials into lessons.

Subsequently, when led the parade with LGBTI-supporting Muslim community groups through the march, he did so with pride.

Likewise, concluding the celebrations, Moffat took to the main stage in the city’s gay village, centred along Hurst Street, and read out a letter of support he’d been sent by a 10-year-old girl.

He read out: ‘Andrew Moffat, I’m a 10-year-old girl and I fully support No Outsiders. I have a very good friend who has same-sex parents.

‘We’re lucky to go to a school where everyone is welcome and supported. People who don’t want to change are often those that need it the most.

‘I have a four-year-old brother who knows that everyone is unique and different.

‘He knows to be kind to everyone and my family would be happy for him to be taught No Outsiders.

‘Don’t give up. In the world there are more people that support you that don’t.’

From pushing banners outside the school gates to removing their children from lessons altogether, Moffat’s inclusive lessons erupted exclusion from parents.

Protesters argued that primary school children are too young for such material. Or that pro-LGBTI education stands in contrast to Islamic teachings.

The ensuing row made headlines, but regardless of the backlash, LGBTI people and allies have widely praised Moffat for his commitment.