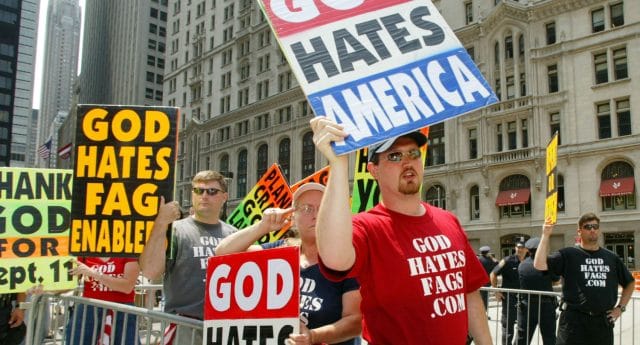 The Westboro Baptist Church says the terror attack in London which left three innocent people dead happened because they’re banned from the country.

Three people were killed and 20 injured in the terrorist incident yesterday in the centre of London, when a man ran a car into a crowd on Westminster Bridge, before stabbing a police officer outside Parliament.

The attacker was shot by police and later died.

Mrs May was responsible for enforcing the ban on the group travelling to the UK when she was Home Secretary, after some members of the Phelps family were excluded by the former Labour government.

The ‘church’ claimed that the attack was the “UK’s unwise ban of WBC gospel preaching now blooming”.

They claimed: “How many times have we told the UK-in spite of their bloody ban-that they’ll provoke God’s wrath w proud sin? God is not w you!

“Westminster attack was not God’s love to the UK. Terror all around. Ezekiel 18:30. Turn from your sins, for why will you die?”

The hate group also re-uploaded a video attacking the UK’s embrace of “sodomy” and same-sex marriage.

The group recently led a string of anti-Semitic pickets against Jewish institutions.

It attempted to tie American Jewish people to the acceptance of the “cancer” of homosexuality.

The group claimed “The Lord God entrusted His Holy Word to the ancient Israelites long ago. Their modern descendants have sorely despised and disregarded that manna from heaven to their detriment. Yeshiva University encapsulates the perverse state of both modern Judaism and the American university system. These modern Jews worship themselves as a people.

“They set up their ancestors, relatives and descendants as idols, and then try to punish anyone who dares speak the truth about what a bunch of reprobate sinners they all are.

“WBC will shine a light on the fact that the American Jewish community was the earliest and most forceful group to spread the soul-damning lie of ‘it’s OK to be gay’.

“This lie then spread like a cancer across this land and throughout the higher education system, bringing the curse of God down on the entire nation.”