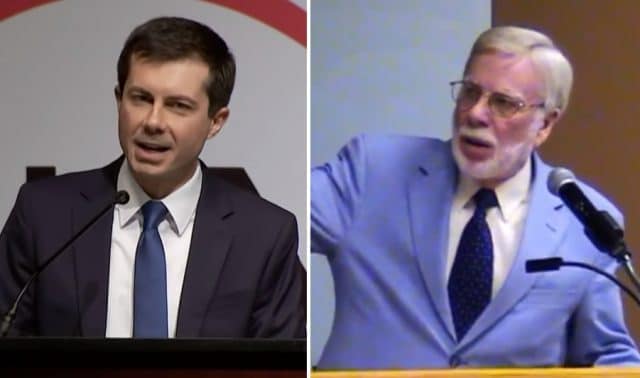 A former member of the Indiana House of Representatives is the latest evangelist to attack 2020 presidential candidate Pete Buttigieg’s sexual orientation.

Don Boys, a fundamentalist Baptist preacher from West Virginia, published a vile, lie-filled blog post last Wednesday claiming that Buttigieg first presidential term would be cut short because the lifespan of all homosexuals is “about 20 years less than for normal people.” Boys did not cite a study to back his wild claim.

In a blog post entitled “Pete, Since You Brought it Up, How ‘Gay’ Are You?,” Boys said it was his right as a voter to ask “how gay Pete is?”

Boys claimed that 17 percent of homosexuals admit to “rubbing or ingesting” the feces of partners and that 41 percent practice fisting—at times with carrots and “even gerbils!”

“Since homosexuals do many dangerous things it seems wise, considerate, thoughtful, and loving to suggest they cease such dangerous activities,” he wrote. “We strongly suggest that one should not smoke, eat much red meat, not drink, and not gain weight since those are deadly activities. Why is it unreasonable… to demand the same of homosexual candidates?” he added.

Evangelist Franklin Graham recently took to Twitter to say he believes homosexuality was a religious sin and “not something to be flaunted, praised or politicized.”

Graham’s comments appeared to have been a response to Buttigieg stating that “God does not have a political party” while speaking about his own faith during a town hall two days earlier.

One in two sexually active persons will contract an STI by age 25 regardless of sexual preference, according to research published by the American Sexual Health Association.