Home Gay Life Gozo, Malta: how to have a romantic holiday with your girl best... 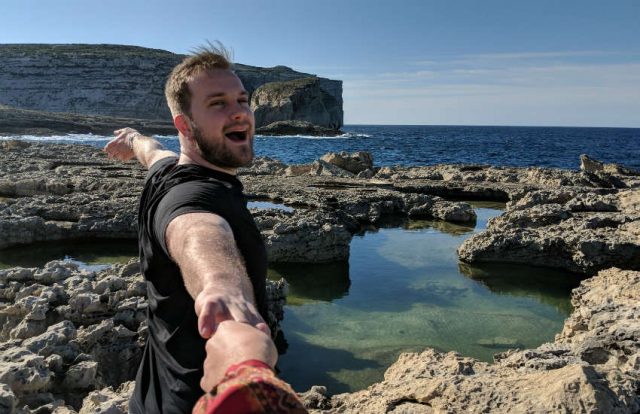 Not all of us can be in relationships. Dating apps are hell in cuboid form and Grindr is the ninth circle. But why should couples get all the adorable vacations away in luxurious rooms and candlelit restaurants?

No, friends are the best and you should be able to enjoy the romance of an island getaway together. I enlisted my best friend, who I have known and loved for over ten years, to visit Gozo, a small island in Malta’s archipelago.

It’s as if the place is designed to be called picturesque, boasting dramatic landscapes alongside cute, tiny villages, and framed by liquid sapphire. Nearly everywhere is the ideal place for a proposal.

And when you’re not in love, it is the best destination to pretend you are with your platonic one and only. 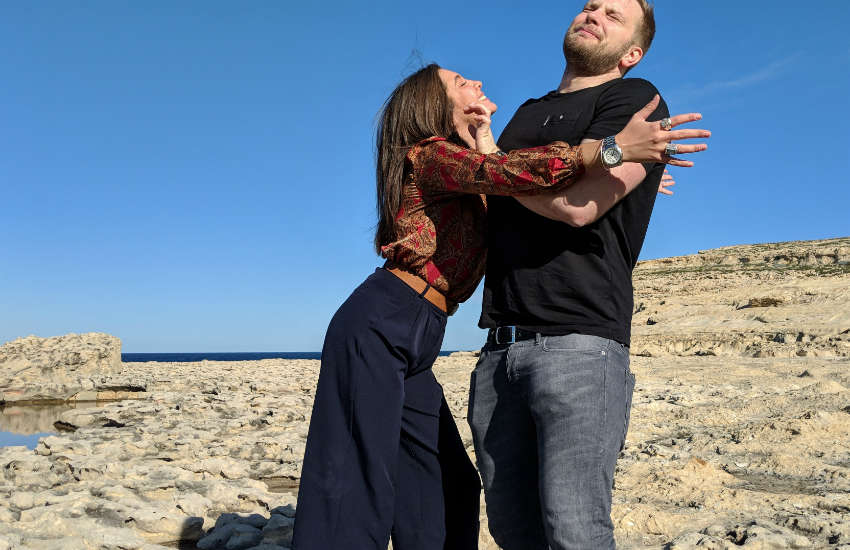 True love is love between friends

There are two ways to absorb the sights of Gozo. Unlike its more populated and metropolitan cousin, Malta, Gozo, is a land of vast countryside interspersed with small villages and towns. So you either ride around in a car, face pressed against the car window, before stopping at areas of note.

Or you take it into your own hands.

‘I’m not getting on that,’ my friend said, the fear exaggerating every Essex-ism on every syllable as we stared at the quad bike.

That’s right, like a pretend couple we hopped on the quad bike for a tour round the island. She got on the back and I, the biggest idiot, drove the thing.

The island opened up before us. Our guide/driver stayed several paces ahead as I tried to remember everything my driving instructor ever taught me about road safety.

Houses swerved past, nearly all designed with the Maltese baroque architecture. Curved doorways and desert-sand colors dominate the streets, though the most striking feature are the balconies on every house. Our guide told us that centuries ago, the women of the house couldn’t leave without being accompanied by a man. So they built these balconies – either quaint or fabulous, depending on class – to look into the streets below. 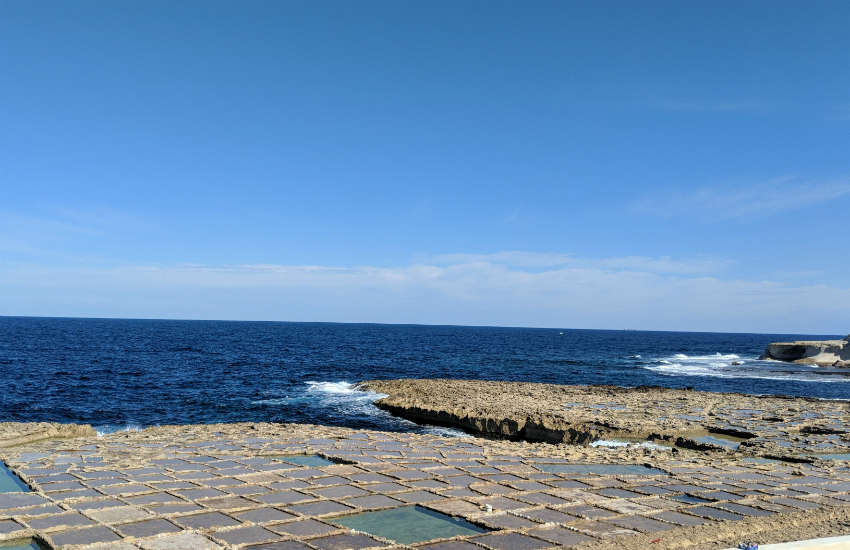 Like much of Malta, the Salt Pans are beautiful – and looked after by a single family

I swerved past Maltese drivers as the road took us first to Kennuna Tower. Built by the British on the cliffs near Nadur, it looks out at the luscious green and yellow fields that reach out to the blue coast. A short ride later took us to one of Gozo’s many cave hideaways, Mixta Cave.

We slipped into the backstreets, bumped over stones and swerved past potholes. At one point, we both trembled as the bushes at the side of the road gave way to sheer drops. For once I didn’t think what they’d tell my mum as I tumbled to my death – I worried more about my friend’s dad marching into the underworld and beating me up in hell. 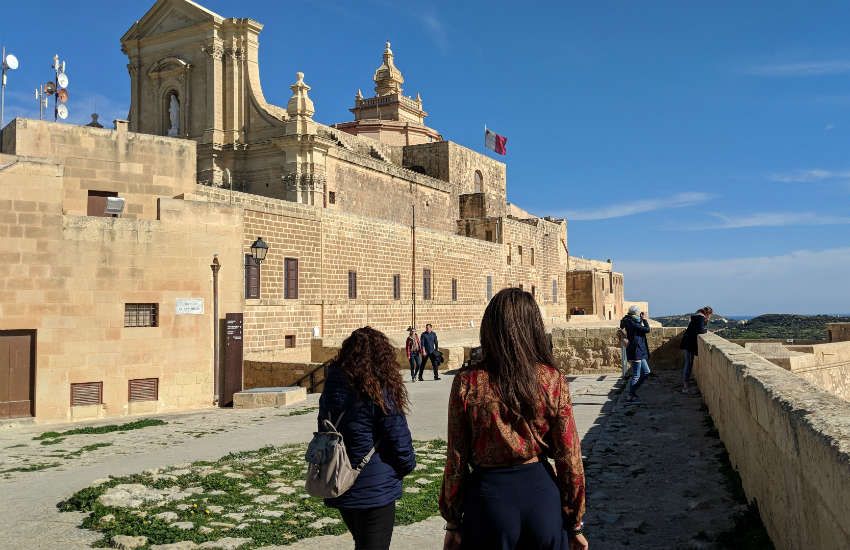 The Citadel is truly a sight to behold

I could feel my friend on the back tense up – I was glad to have her confidence.  Yet eventually we eventually made it to Dahlet Qorrot Bay.

This little spot is a hidden beauty. It’s popular with fisherman and tourists barely know about it (probably because there aren’t any shops and only two toilets). However, we stopped to take our breath. I cannot exaggerate how wonderful the sea is around this area. I could watch the waves crash against the sand for ages, like sapphires hitting gold and splitting into a thousand tiny jewels.

As we got off the quad bikes, my friend said: ‘You’re actually pretty good at driving that.’ I felt the trip already peaked. That was until we met our tour guide, Audrey. 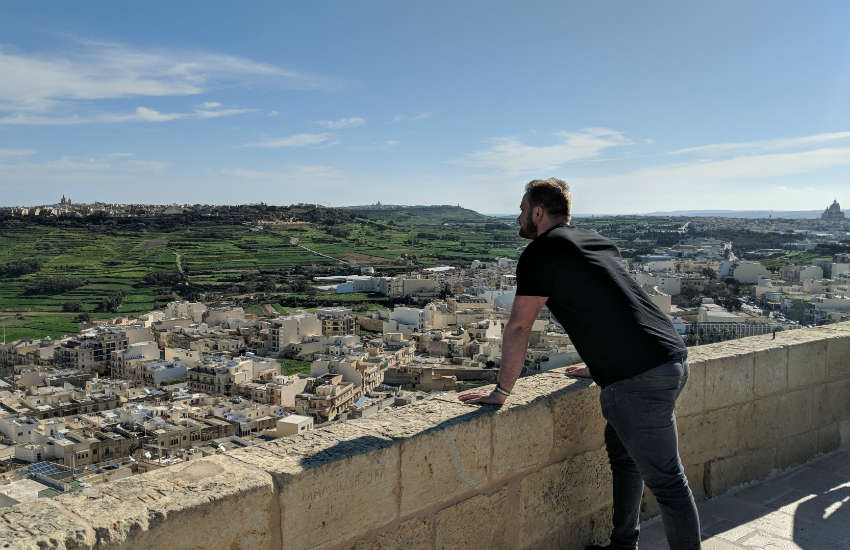 While the landscape is stunning, it’s the Maltese and Gozitan people that makes a trip to the islands worth it. The island’s culture is ancient, being one of the oldest civilizations in Europe. Yet this also lends a rather unique appeal: Turkish and west Asian artifacts from the Ottoman Empire, influence from Italian people and food, its neighbor across the seas, and hints of British sensibilities.

Our tour guide, Audrey, was a true Gozitan. Truly exceptional – she possessed all the passion of the Mediterranean with the hint of cynicism that was like dopamine to my pessimistic British brain. 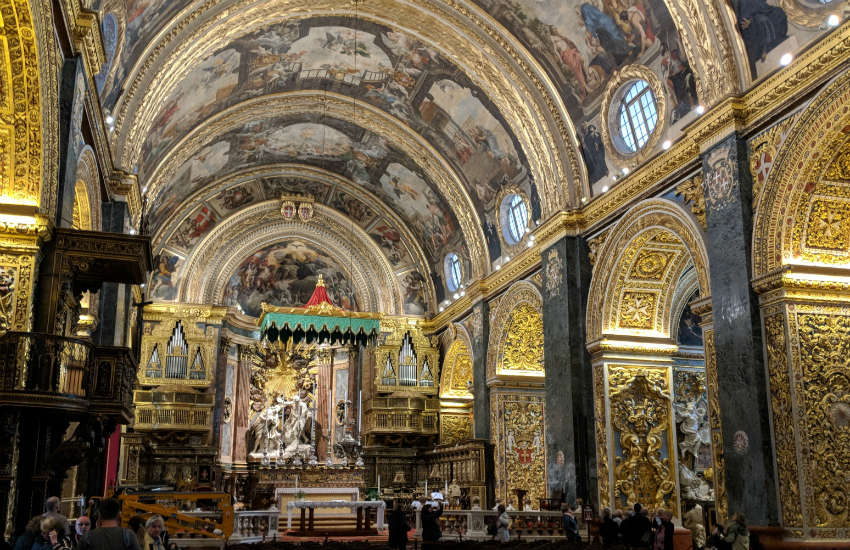 She took us to Dwerja, telling us the story of the Azure Window. Stories about the iconic rock formation’s importance through history, of the literature written about it and even her role as an extra in Game of Thrones with it as the backdrop. The Azure Window was clearly incredibly important to her.

‘But then it crumbled into the sea. Even the foundations are gone,’ Audrey said, dejected. ‘There’s nothing left.’

‘There’s nothing left?’ I replied.

‘No. Nothing. There’s nothing left.’

We walked through the walls of the Citadel. It’s a fortified city in the middle of Victoria, which has been inhabited since the Bronze Age. She spoke of the battles waged at its gates, including the Ottoman Empire battering the walls with canon fire and enslaving the population within.

Perhaps one of the more stunning locations is Calypso Cave. It overlooks Ramla Bay, the biggest sandy beach in Gozo. The February weather meant people weren’t quite sunbathing yet. Around the statue in the center of the beach – which protects swimmers from drowning – people create love hearts out of pebbles. 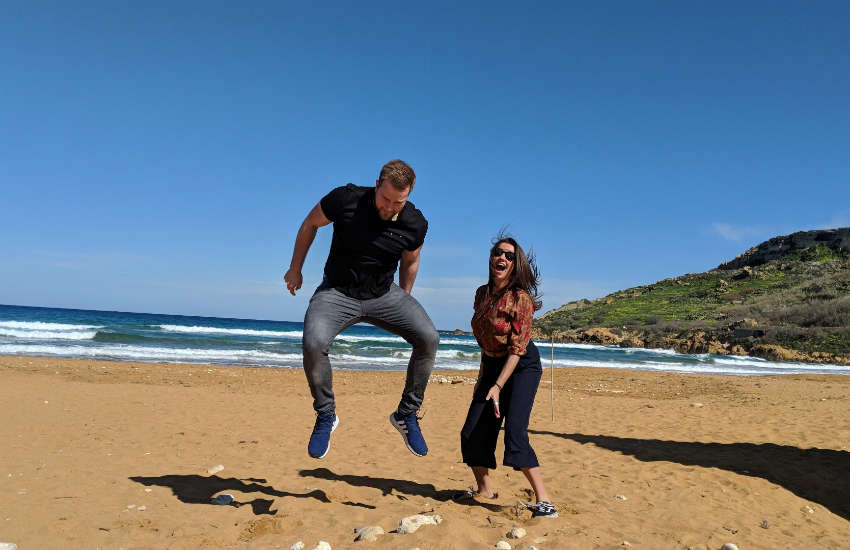 We tried to do the jumping picture thing and failed

My friend made one for her boyfriend. No. Not allowed. I kicked her pebbles into the sand. This is a friendship trip, no time for love.

However, if you planned to enter Calypso Cave like Odysseus himself (the cave features in Homer’s epic), you’ll be a bit disappointed. Unfortunately, over-tourism has caused the area to become a bit unstable. So entry is not permitted.

Trekking through the island is weary work, so we finally made our way to the Kempinski hotel. It’s a faultless place to stay. Inside is a winding palace, where behind each elegant corner is a restaurant, room or a spa. We only ate breakfast in the lower floor dining room – a decent buffet with a few local Maltese delicacies (the Imqarets were great).

I treated myself to a massage in the spa center to loosen all the stress of trying to keep my friend alive on a quad bike, before making my way to the pools. There’s an outdoor pool, which we avoided as the winter winds still held a chill. But we stuck around the Hammam pool, for a more tranquil experience.

After sleeping in their gorgeous suit room, complete with a balcony overlooking the palm trees out back, we stepped out to explore the restaurant scene. Another interesting quirk of Gozitan life is that restaurants serve huge dishes of food. We asked our guide, Audrey, about this, and she claims no one in Malta would go to a restaurant that serves small plates.

This is an attitude I can get behind. Especially considering the kind of food on offer. It’s an island, so ignoring the seafood is an act of stupidity that should get you catapulted into the ruins of the Azure Window. We started with , a casual spot by the beautiful marina. The host proudly displayed the barracuda to both my friend and I before bringing it to us, grilled, soft, delicious. 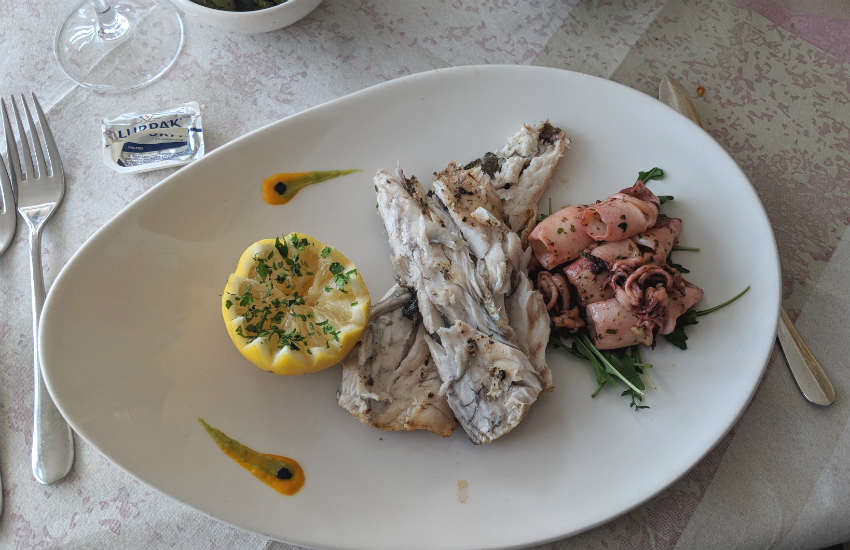 Despite being an island, their meat of choice is rabbit. To get the best of this dish you need to head back to Malta for one of the more outstanding restaurants in the whole archipelago, . I tucked into a saddle of rabbit with a rabbit confit croquette and roast garlic puree. Excellent presentation weaved together with masterful cooking – I implore you to visit the restaurant. It’s also one of the fancier restaurants in Malta, so perfect for a date night.

It all ended with a wine tasting at the Ta’ Mena estate. Owned by the Spiteri’s, it truly is a family business. The walls are decorated by the owner’s favorite artwork – and you can even sneak a peak at some of his own creations. Our enigmatic guide this time was a British ex-pat.

He explained everything from olive oil production to the creation of wines through a traditional Gozitan method. Until we got to his and my favorite part: wine tasting. You must try the Marsamena Gozo D.O.K. Riserva 2009.

We bought a bottle for ourselves and watched the sunset from our hotel balcony. 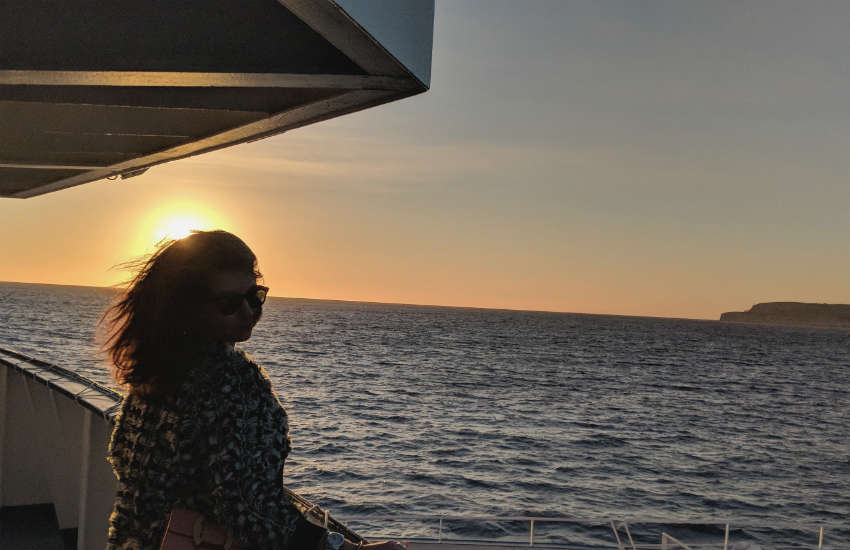 Taking the ferry ride back to Malta, it’s impossible to not immediately feel nostalgic from a trip to Gozo. The place is romance exemplified, from the people to the beautiful landscape to the delicious food. But taking the time to experiencing ancient ruins, quad bike escapades and pure seas with someone you love – platonic or otherwise – then you’ve got something a bit special.

Flights to Malta from London Gatwick start from £172 return with .

A standard room at the starts from 85 euros per night, room only.