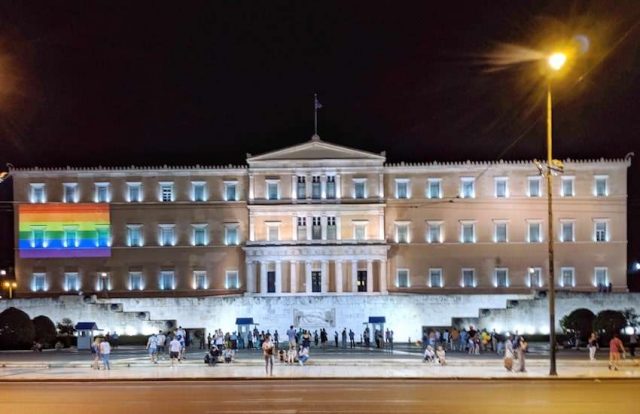 The Greek Parliament was last night lit up with a rainbow, as Athens Pride revelers demanded justice for the activist Zak Kostopolous.

Also known as Zackie Oh, the 33-year-old was a beloved drag queen and HIV and LGBTI activist. He died from a heart attack caused by injuries he received when fatally beaten.

Athens Pride 2019 remembered the activist for their 15th anniversary held in Syntagma Square, just below the steps of the Greek Parliament.

The parade, live streamed by Gay Star News, had its largest ever crowd. Organizers tell us 100,000 attended, smashing last years numbers of 80,000.

As night fell, a firework celebration lit up the sky, whilst a rainbow flag was projected onto the Greek Parliament.

Emotions about Kostopoulos’ death at the pride event were high.

Reflecting on the attack the Deputy Mayor of Athens Nelly Papachella told Gay Star News: ‘It was awful, and in the center of Athens – at midday?’

Whilst Mayor George Broulias reaffirmed: ‘Everyone deserves equal rights, and we have to provide for all.’

But Kostopoulos’ friends and family still trying to find out more information about his death.

Taking to the stage to ‘demand justice for his death,’ his brother and partner spoke before the parade begun.

The Justice For Zak/Zackie campaign said: ‘we will fight until those who are guilty of Zak’s murder are punished.’

Two men who thought he was trying to rob their jewelry in Athens, Greece violently assaulted Kostopoulos. They were later charged with inflicting lethal harm resulting in death.

But police are also implicated in his killing after video emerged of four officers beating and kicking a bloody, barely conscious Kostopoulos.

Since his death, media and police labeled him as a ‘knife-wielding junkie thief’ leading the community to demand justice. 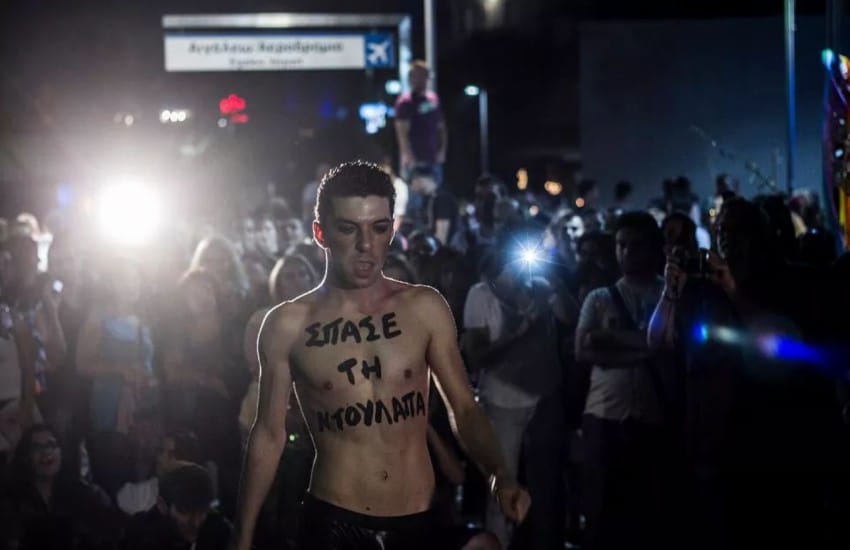 Though this the second time the pride flag has been projected onto parliament in Syntagma Square, it comes at a time of

‘The pride flag on the parliament gives a very clear message of visibility in Greek society,’ Papagianopolis says.

‘We had had the broadest political support and more than 100 thousand people joined us to commemorate LGBTI history and demand justice for Zackie Oh.’

The Prime Minister Alexis Tsprias marked the day by posting a message of support on Instagram:

‘Everyone has the right to invoke all rights and freedoms without any discrimination whatsoever, in particular as to race, color, gender, language, religion, politics or other beliefs.’

Athens Pride has been running for 15 years, and this year had the theme ‘the street tells our story.’

The event wanted people to consider the role taking to the streets to ‘claim visibility and respect’ has, as the global LGBTI community remembers 50 years since the Stonewall Inn uprising.