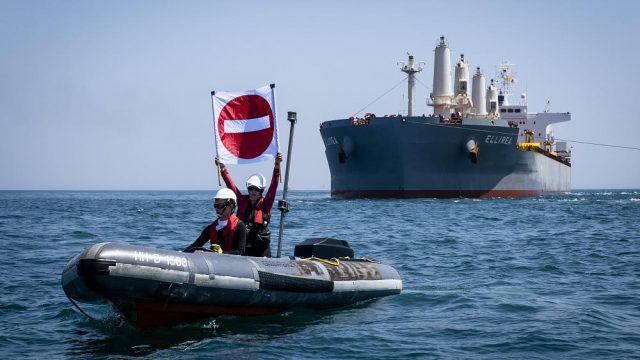 Greenpeace France continued its blockade of a cargo ship in the harbour of Sète, France, on Saturday, to protest against the French government’s lack of action on climate change.

The action, which started on Friday, saw as many as 50 activists from Greenpeace, including French, German and Dutch citizens, block the cargo ship ELLIREA, which came from Cotegipe, near Salvador in Brazil, as it tried to enter the harbour.

The cargo ship is carrying 50,000 tonnes of soymeal, half destined for France and half for Slovenia, to feed animals across the European Union, according to the NGO.

Activists blocked the dock’s four unloading cranes and barred access to the mooring dock. They also unfolded a 15-metre-long banner with the text “Industrial livestock = Deforestation” written on it and repainted the hull of the ship with the message “45 degrees, zero commitment” — a message aimed at the French government for what they claimed was inaction in the fight against global warming.

“Europe is suffocating with the heatwave and climate change will only make it worse,” Cécile Leuba, a forest campaigner for Greenpeace France, told Euronews.

“Since the government is unable to respect its commitments to fighting against deforestation and climate change, we’re doing it instead”,

Greenpeace targeted the ELLIREA cargo ship because it is “a symbol of the destructive soya system,” the group explained. At least 89% of the soya coming from the Cotegipe harbour comes from Cerrado, a wild savannah in Brazil, which is rapidly being deforested.

The soya onboard is composed of 95% GMO soya that has been washed down with pesticides, Leuba told Euronews, adding at least one-third of the pesticides used on this soya are banned in the EU.

“We are blocking the boat’s unloading until the government gives us confirmation that this cargo has not contributed to deforestation,” she said.

Leuba added that Greenpeace denounced the French government’s inaction on climate change, which is contrary to the country’s commitment, taken in November 2018, to end deforestation linked to agricultural imports by 2030.

President Macron also addressed the issue of European livestock being fed with GMO soya in February, saying: “The danger for our agriculture isn’t concurrence with Spanish fruit. It is the fact that our livestock is fed with imported GMO soya, and that the price of our chicken depends on it.”

The Greenpeace operation started at 14.30 pm CEST on Friday. Around one dozen activists were still on site at the time of publication — almost 24 hours after the start of the blockade.

“We have received zero response from the French government,” Leuba told Euronews. “The role of [French environment minister] Francois de Rugy should be to make sure that imported soya does not cause deforestation,” she said, “but he does nothing. We haven’t heard from him.”

This action follows a Greenpeace report entitled “Meat crazy: Europe feeds the climate crisis with its soya addiction”, published on June 11. The report outlined the effects of industrial farming and European meat overconsumption on deforestation and environmental destruction in South America through soya culture.

Around 87% of the soya used in the EU is destined for livestock consumption.

Euronews contacted the French environment ministry but has not received a response at the time of publication.