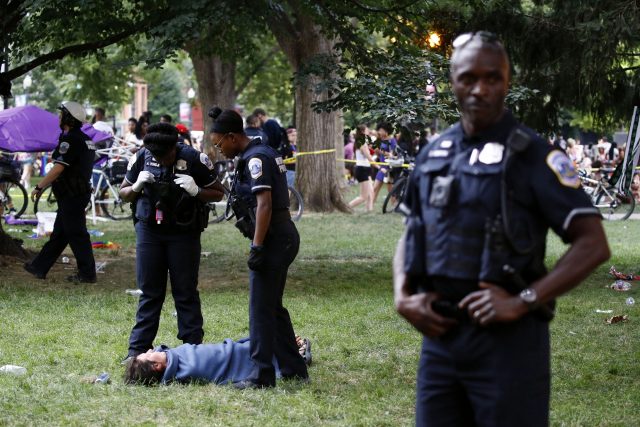 Seven people were injured in a stampede caused by a man waving a BB gun at Washington Pride parade on Saturday (June 8).

Thousands were celebrating LGBT+ Pride in the US capital city when shortly after 7pm a man pulled out a what appeared to be a silver handgun. The weapon was a BB gun, which fires small metal projectiles and can cause serious injuries if fired at close range.

The man has been named in US media as Aftabjit Singh and was allegedly confronting a person who was “hitting his significant other.” As he was led away in handcuffs, Singh vowed to come back and shoot the person he had threatened, police said.

Although no gunshots were fired, seven people were taken to hospital for non life-threatening injuries after hundreds fled the area in panic, mistakenly believing there was an active shooter. Singh has now been arrested on weapons possession and disorderly conduct charges. He is due in court on Monday (June 10).

Twitter user @beingaiden captured the terrifying moment the stampede was triggered in a video shared online:

<p lang=«en» dir=«ltr» xml:lang=«en»>#DCPride #CapitalPride #shooting Marching in the Gay Pride parade in Washington DC. As my girlfriend and I were walking past Dupont Circle, apparently someone started shooting. I did not hear the shots, but caught the moment of the stampede. People went quickly from smiling, pic.twitter.com/oPQdIrM3dG

He said: “I did not hear the shots, but caught the moment of the stampede. People went quickly from smiling, cheering and dancing to running for their lives. The scariest thing was not the shooter – but the people panicking.”

Another user @Smolbeanchild3 tweeted: “I was part of the front of the crowd who went running. It was probably the scariest moment in my life.”

“Everything fell and everyone said ‘run!’” Elizabeth Hernandez, 19, told AP.

She said she heard “pop, pop” and saw a crowd of people starting running frantically from the area. Other eyewitnesses have suggested that the “gunshots” may have been the sound of metal barriers hitting the ground as people pushed past. Hernandez was pushed into a nearby restaurant where she took shelter with a group of others.

Guillermo Rivera, a commander with the Metropolitan Police Department, said there was an “adequate amount of resources on the ground” which is why police were able to respond to the incident so quickly.

But the level of panic caused by the false alarm is an indicator of rising tensions in the country over LGBT+ issues.

On the same day an armed white nationalist neo-Nazi group marched in protest at the Detroit Pride parade. Accompanied by a police escort, they were seen tearing up a Pride flag and urinating on an Israeli flag while giving Nazi salutes.