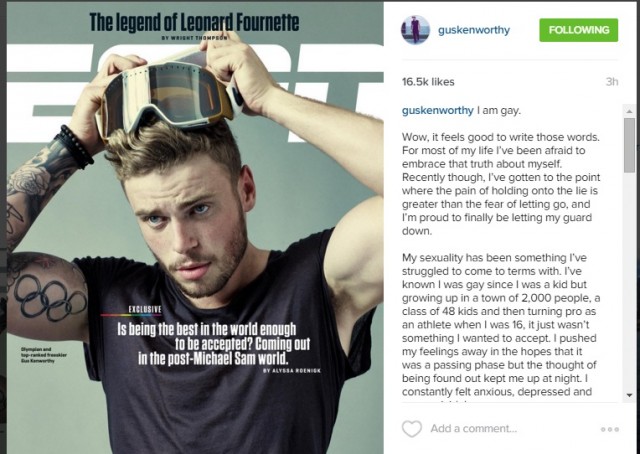 It’s the simplest and often hardest way to come out. No preamble, no build up – straight to the point. It’s also how Olympic medal winning free-skier Gus Kenworthy came out on Twitter on Thursday morning. He also attached a photo of himself on the cover of ESPN Magazine, where he discusses coming out in more detail. His frank interview covers familiar territory for many gay men. When things were at their worst for him, Kenworth confides that he considered suicide as a way out.

This darkness came from his worries that if he came out publicly, his fans back home and especially his sponsors, would abandon him. He also had to face the day-to-day slurs made by friends and fellow athletes who would insult gay men without knowing about the secret Kenworthy was hiding. He talks to ESPN about how free-skiing is a sport that glorifies the “alpha male thing” occasionally, and that “constantly lying and constantly feeling like you’re being deceitful” was “so painful”. Now he says he’s ready to “open up and let everyone see me for me”. He also says that he hopes everyone “accepts it.”

He’ll be cheered with the responses he’s received from his fellow athletes. The US Free skiing team tweeted: “A huge day in action sports, the @Olympics and in @guskenworthy’s life. We stand with him and support him.”

There were other tweets congratulating him on his bravery, with many saying they were proud of him for coming out. Kenworthy took home a silver medal at the 2014 Sochi Winter Olympics. Making hearts melt even in the cold temperatures of Sochi, he stayed in Russia for a month after the games had finished to rescue stray puppies and take them back home to Denver.

Yet he’s concentrating now on being the best in the world at his sport, and with this huge weight off his shoulders, he just might achieve it.