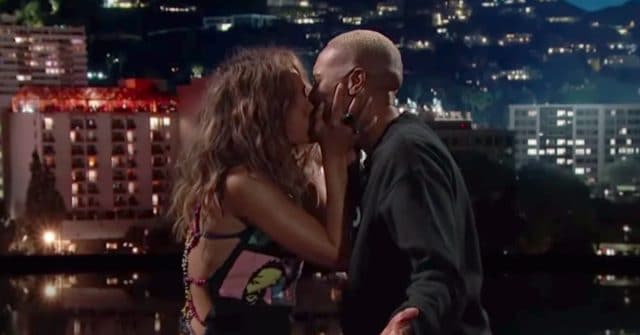 Lena Waithe was in need of some big motivation as she hosted Jimmy Kimmel Live! – luckily Halle Berry was on hand to deliver just that.

TheMaster of None star stepped in for Kimmel for his late night talk show on Wednesday night (May 22).

As she began her opening monologue, Waithe admitted that she felt “a little nervous,” and needed “to get psyched up.”

To help her out, Kimmel’s security guard-turned sidekick Guillermo Rodriguez pressed a big red “Berry Button,” which beckoned the Oscar-winning actress onto the stage.

Halle Berry and Lena Waithe on the set of Jimmy Kimmel Live! (YouTube)

“I need some inspiration, like that Oscars speech you gave that got me hyped,” Waithe replied, referring to Berry’s historic 2002 Best Actress win—the first time a black woman had ever received the honour.

“I need you to give me some of that Halle Berry juice.”

The Monster’s Ball actor replied: “Lena, you know I know you, right?

“I know that you are a force of nature. You are a beautiful African American queen. You about to slay this show!”

She quipped that Waithe, who wore a Coco Butter sweatshirt by “gender free” brand Stuzo Clothing, was “already winning, because you are dressed way better than Jimmy ever was.”

As Waithe told her that she was ready to continue, Berry added: “I think you need something else,” before planting a kiss on her lips.

Waithe first rose to prominence by starring in and writing for the Netflix seriesMaster of None.

She has since become one of Hollywood’s most prominent LGBT+ voices, winning acclaim for her sitcomBoomerang, in which Berry stars, and for her recent stint as a guest judge on RuPaul’s Drag Race.

In April it was announced that BET, which airs Boomerang, had picked up Twenties, Waithe’s new half-hour sitcom about a young black queer woman.

Early next year the lesbian multi-hyphenate will appear in the third season of Westworld, the first trailer for which was released on Sunday (May 19) ahead of the final episode of Game of Thrones.