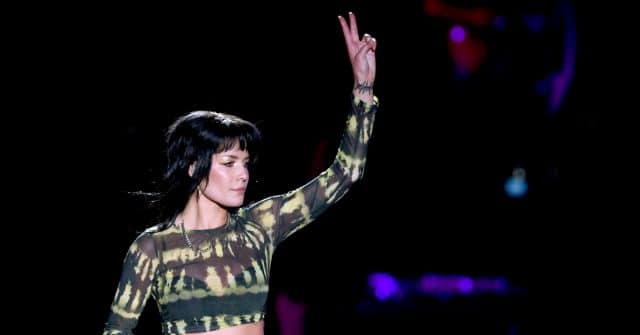 Halsey paid tribute to the lesbian couple attacked on a London bus and slammed “straight pride” at an intimate gig in Camden last night (June 10).

She wore a t-shirt which had a picture of the attacked couple on the front and the words “f*** your straight pride” on the back.

In a powerful speech caught on video, the singer said: “Do you guys see the two young women on my shirt? Do you know who they are? The two people on my shirt are a young couple named Melania and Chris.”

“A couple nights ago, right here, they were assaulted because they’re lesbians, because they gave the appearance of being lesbians.”

She continued: “The sad reality is that after the Pride parades are over and after the bars close their Pride nights, when the glitter’s being swept out of the streets, a lot of people get on those trains and they get on those buses and they try to wash the rainbows off their bodies and they peel the stickers off their clothes because when Pride is over, it’s not safe to be gay anymore. Because they are worried that someone is going to viciously assault them or viciously attack them.”

One fan caught the speech on video and posted it on Twitter, where it now has two million views.

<p lang=«en» dir=«ltr» xml:lang=«en»>Halsey getting a room full of queer kids to scream “I WILL NOT BE AFRAID” after two women were beaten for being gay in the exact same town she’s performing in. She’s wearing a shirt with their faces on the front, and “FUCK YOUR STRAIGHT PRIDE” on the back. pic.twitter.com/VssWprS3gX

The fan captioned the video: “Halsey getting a room full of queer kids to scream “I WILL NOT BE AFRAID” after two women were beaten for being gay in the exact same town she’s performing in. She’s wearing a shirt with their faces on the front, and “F*** YOUR STRAIGHT PRIDE” on the back.”

Halsey went on to address the issue of the proposed “straight pride” parade in Massachusetts, during the concert at the Electric Ballroom on Camden High Street.

“Because every f****** day on public transport is a straight pride parade.”

Then, while wrapping herself in a Pride flag on stage, she ended the speech: “We need to take moments like this when all of us are together to remember how lucky we are to have a safe space like this.”