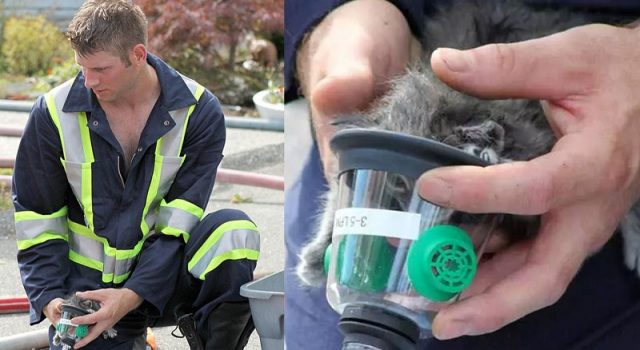 Three adorable kittens were rescued from a burning home in British Columbia on Saturday, but it was their insanely adorable rescuer who is getting the internet all hot and bothered this week.

A quick thinking neighbor snapped photos of the firefighter – which just happened to have his shirt unbuttoned and hanging open – as he cradled one of the tiny kittens in his hands and administered oxygen using a “pet oxygen mask.”

This guy saved baby kittens from a fire in B.C. https://t.co/YJKB9aOJme pic.twitter.com/zRiaqRScJT

Mountain View Veterinary Hospital reports that all the kittens are now safe at home with their new caregiver Dr. Henderson, reports the National Post.

“No life too small to save,” said Langley City and Township resident Anngela Bayer.

The cause of the blaze is still unknown.

Today on your 5:30 #GoodNews we go over what's going on in this picture. @NSavageradio may need a cold shower…-DA pic.twitter.com/LtJN9KiWtg

He can rescue my kitten next https://t.co/NFcreFsbJ1

@AshleyCsanady @JaneLytv I mean, does he just walk around with his fire suit partially unzipped like that all the time?

How many marriage proposals you think he's received today? ? https://t.co/DM2Vhb1ZoW