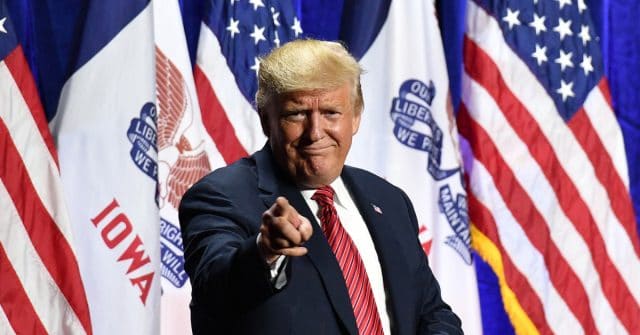 Donald Trump celebrates his birthday on Friday, June 14, four years after he announced that he was running to be the 45th US president.

Trump turns 73 today, and – as usual – his birthday falls during Pride month.

On May 31, the president tweeted, “As we celebrate LGBT Pride Month and recognise the outstanding contributions LGBT people have made to our great Nation, let us also stand in solidarity with the many LGBT people who live in dozens of countries worldwide that punish, imprison, or even execute individuals….

“….on the basis of their sexual orientation. My Administration has launched a global campaign to decriminalise homosexuality and invite all nations to join us in this effort!”

On June 13, he was wrongly credited with Botswana’s decision to legalise gay sex.

So, what has the Trump administration’s impact been on the LGBT+ community since Trump’s last birthday?

Trump’s Attorney General Jeff Sessions announces the creation of a new “religious freedom task force.” Activists feared it would be used to “license discrimination against LGBTQ people in the public square.”

Unmarried same-sex partners of UN employees living in the US would no longer be granted visas, Trump’s administration announced. This meant same-sex couples would be forced to marry – which could endanger lives, given it’s still illegal to be gay in around 69 countries.

Trump’s administration considers implementing a new policy that would change the legal definition of gender to one’s sex assigned at birth, potentially removing discrimination protections for around 1.4 million transgender Americans who don’t identify as the gender they were assigned at birth.

It should be legal to for businesses to discriminate against trans employees, Trump’s Department of Justice argues in a brief to the Supreme Court.

US officials at the UN push for rewriting collective statements to remove language that’s inclusive of trans people, like changing “gender-based violence” to “violence against women.” This is apparently part of the Trump administration’s campaign to legally erase trans people.

Trump asks the Supreme Court to fast-track its review of his proposal to ban trans people from serving in the US military.

Trump strips the requirement for the US to have LGBT+ rights protections from a trade deal with Canada and Mexico. It means that the US doesn’t have to proactively combat anti-LGBT+ discrimination in order to be part of the trade deal.

The Trump administration shut down an HIV research facility in Montana and stopped research into a potential HIV cure, because it objected to scientists’ use of aborted fetal tissue in the research. Gay and bisexual men account for roughly two-thirds of new HIV diagnoses in the US.

Trump announces anti-LGBT Michael Mulvaney will be his new acting chief of staff.

Mulvaney has a history of anti-LGBT legislation and statements, including saying that encouraging countries to drop homophobic policies is “religious persecution.”

Two US Air Force members are forced to leave the military after testing positive for HIV. They file a lawsuit alleging discrimination.

At the White House, Trump held a meeting with a far-right group who condemned transgender people and same-sex marriage.

One of the attendees reportedly told Trump that same-sex marriage, which has been legal in the US since 2015, was harming the fabric of the country.

At the annual National Prayer Breakfast, Trump applauds Karen Pence, wife of the vice president, for deciding to return to teaching at an anti-LGBT+ school.

In a late-night announcement, the Trump administration says it’s decided to ban trans service members from openly serving in the country’s armed forces according to their gender identity. In a month’s time, the military must begin discharging trans members.

Jair Bolsonaro, the anti-LGBT president of Brazil, visits Trump at the White House. President Trump congratulated Bolsonaro on his “tremendous” election victory, and said he expects they will work well together as they “have many views that are similar.”

Trump congratulates Brian Hagedorn, a anti-LGBT Republican, on being elected to the Wisconsin supreme court.

Trump’s ban on trans people in the military comes into effect, jeopardising the livelihoods of thousands.

Graham, who called for Pete Buttigieg to “repent” his sexuality, posed for photos with Pence.

President Trump says he “opposes the Equality Act,” which would ensure LGBT+ people can’t be discriminated against in areas including public accommodations and facilities, education, federal funding, employment, housing, credit, and the jury system.

A new Trump rule will allow homeless shelters in the US to reject trans homeless people. The proposed new rules will make it legal to discriminate against homeless trans people based on “religious beliefs.”

In an interview with Piers Morgan, Trump attempted to justify his decision to ban trans people from serving in the military by categorising trans people as drug users.

Trump fails to mention the third anniversary of the Pulse nightclub shooting, which killed 49 LGBT+ people.

On the day of the shooting in 2016, Trump was criticised for tweeting, “Appreciate the congrats for being right on radical Islamic terrorism.”