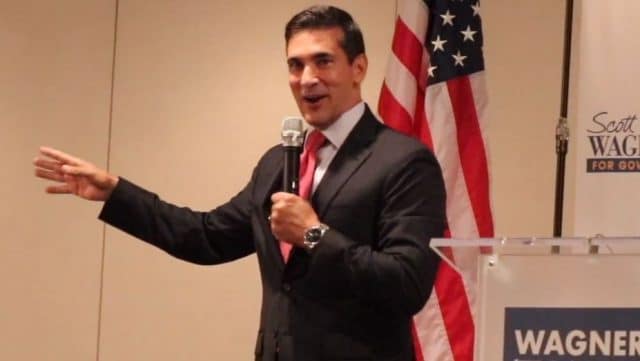 The head of the Pennsylvania Republican Party resigned Tuesday afternoon after reports he sent a photo of his genitals to a Philadelphia city council candidate and said it was her “duty to the party” to send photos back, vowing to “get [her to the] White House at some point,” according to the Philadelphia Inquirer.

Val DiGiorgio allegedly sent the nude photo to Irina Goldstein, according to the newspaper in a story it published earlier Tuesday.

DiGiorgio said in a statement that all communications between the two had been consensual.

“The attempt to represent these communications as anything other than that came only after I declined to support [Goldstein’s] candidacy and take sides in the party primary,” he said in the statement.

In a statement announcing DiGiorgio’s departure, the state GOP praised DiGiorgio’s leadership, writing that he “leaves the state party stronger than when he was elected as Chairman and poised for future victories in 2019 and 2020.”

Acting Party Chairman Bernie Comfort said, “I wish Val DiGiorgio well in his next endeavor,” in the statement.

Former Rep. Lou Barletta (R-Pa.), a close ally of President Trump, told Politico he had been urged to seek the chairmanship.

“Although I have not campaigned for it, I have received calls from supporters to consider it,” he told the publication. “Whoever the next chair is, they need to focus on getting President Trump re-elected, growing the majority in the state legislature and re-electing incumbents in Congress. I will continue to help the president and the party any way I can.”

Barletta’s relationship with Trump would likely make him a frontrunner according to former Rep. Ryan Costello (R-Pa.)

“I’m hearing it is Barletta’s if he wants it, he holds a special place in Trump’s political orbit,” he said, but added there were also “a few talented county chairs that are being talked about, too.”