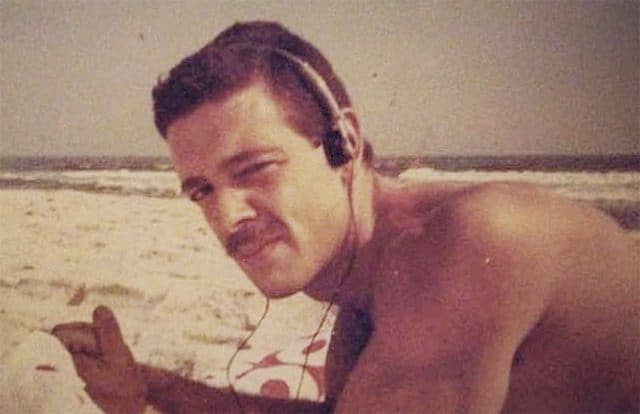 The poignant story appeared on the AIDS Memorial Instagram page

The account features images of people who died from HIV-related illness, along with memories recalled by loved ones.

Every posting is poignant but also often celebratory – remembering the many lives lost to AIDS. This includes many gay men.

A posting this week came via Steve Sobota, remembering his friend John Tenenbaum.

The posting ran as follows 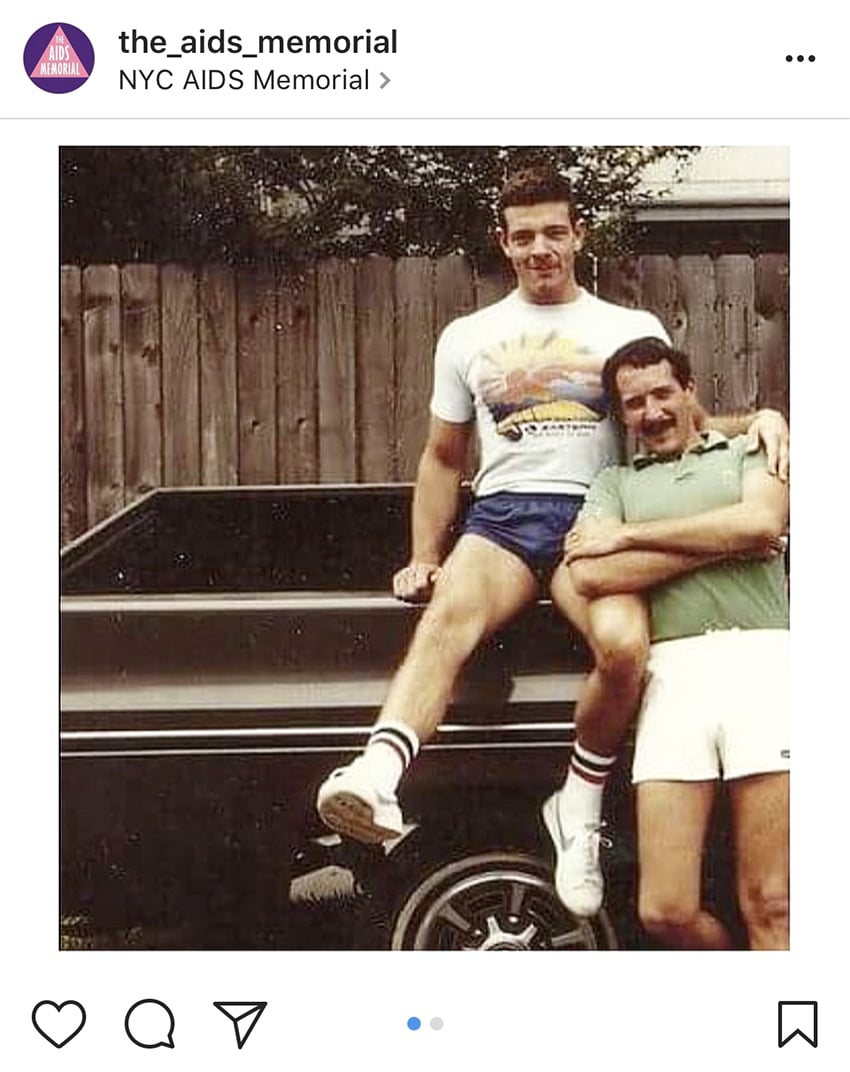 ‘#JohnTenenbaum born Oct 18, 1954, died Aug 1988 – 3 months shy of 34. Waiter, gym coach bon vivant. He had this booming voice. I would answer the phone and hear: “Kitty I have a scathingly brilliant idea” and I knew I would be packing and on a plane headed somewhere. The first photo is John on the left and me on the right in Houston, Texas in 1981.

‘The second photo is John in Fire Island, Pines in 1984. I never would have believed that 4 years after I took this photo he would die.

‘We grew up in Minneapolis. He was a good man. We met as seniors in high school. First danced together at the original Suttons on 7th, upstairs on a Saturday night (we were let in the back door because we were underage).

‘We hit it off and saw the great adventure of life in each other and we both loved to dance. After college I took a job in Houston and John moved to Atlanta. The position I took required me to be in Atlanta monthly so I would fly in on Friday afternoons to spend the weekends.

‘He just wanted to shop and dance and so we did. He went to New York for the opening of ‘The Saint.’ A month later he rearranged his life and moved to New York.

‘I would give anything to have had one last dance’

‘We danced in Minneapolis, San Francisco, New York, Houston, Atlanta, Dallas and Chicago. Thelma Houston’s ‘Don’t Leave Me This Way’ brings back great memories of dancing at ‘Back Street’ and ‘Magic Garden’ in Atlanta.

‘Love and Happiness’ and ‘I’ll Always Love My Mama.’ I would give anything to have had one last dance.

‘John’s death was not directly a result of AIDS. Diagnosed 6 months before his death in 1988, the ultimate gym rat, he refused to watch himself wither away.

‘He chose to take his own life his way on his terms. He did it when he was on the phone with me. He was in NYC. I was in Houston. He took pills. We spent about 4 hours talking and sharing all the joy of the adventures we shared.

‘He said if I tried to hang up and get help he would leave and die alone. I didn’t know where he was calling from so I kept my promise and stayed with him.

‘John would’ve been 63 today. He will be forever young. I miss you so much.” – by Steve Sobota

‘What a selfless and great thing you did’

The posting has been liked over 2,500 times in 48 hours and prompted 175 comments – around twice as many as most postings on the account.

Commentators have praised him for sharing what must be a painful story.

‘I am brought to tears reading this,’ said @cyndiesworld. ‘I am so sorry for your loss and your pain. What a selfless and great thing you did for John – how brave, the both of you. How he must be dancing now.’

‘I can’t fucking imagine having to make that decision while feeling so helpless. But I do know I would be honored to have a friend that respected my wishes until my last breath. Steve you have my kindest regards,’ said @rockycreeps.

In the 1980s, HIV was regarded as a death sentence and there was no effective medication to manage the virus.

Those diagnosed with an AIDS-defining illness were routinely told to get their financial affairs in order. It’s known that some chose to end their life by their own means rather than faced prolonged physical deterioration.

Yesterday, Sobota again contacted the curator of the_aids_memorial to express gratitude for the reaction to the post.

‘I will never be able to thank you for posting this, it has been nothing less than cathartic. For 29 years I have needed validation for doing the right thing the night John died, the comments and the “likes” have been cleansing for me. I promise I have not gone one day in all these years not reliving that night, finally I can do so with joy.’

The AIDS Memorial was launched in March 2016 by a gay man in Scotland who prefers to just use the name Stuart. He said that messages such as the one he received from Sobota is part of the reason the account exists.

‘I receive messages quite often saying that people don’t feel comfortable hitting the “LIKE” button when they read a story on @the_aids_memorial.,’ he posted yesterday. ‘I get that.

‘However, I consider a “LIKE” a way of saying “WE REMEMBERED YOU” and it can also provide some solace to those left behind.

‘Yesterday’s post by Steve Sobota, regarding his partner #JohnTenenbaum, is a perfect example of the way in which we respond to posts on @the_aids_memorial can make a difference.’

In a message to GSN, Stuart said Steve had originally posted about John on his Facebook page, and he asked him for more details in order to run it on the AIDS Memorial Instagram account.

‘I was just stuck by the photo initially and how young he had passed.’

GSN has reached to Steve Sobata for further comment.

Today, those diagnosed with HIV and who are put promptly on to treatment can expect to live a near normal lifespan. Despite this, a UK study earlier this year revealed that people diagnosed with HIV have a suicide rate twice as high as the general population. Campaigners in the HIV arena say this is largely down to stigma and fear.

Matthew Hodson, Executive Director of NAM aidsmap told GSN at the time: ‘It’s 2017, we have had effective treatment for HIV for over 20 years. By now, nobody should be dying as a result of HIV infection.

‘It’s urgent that people know that with treatment someone can have a normal life expectancy.’