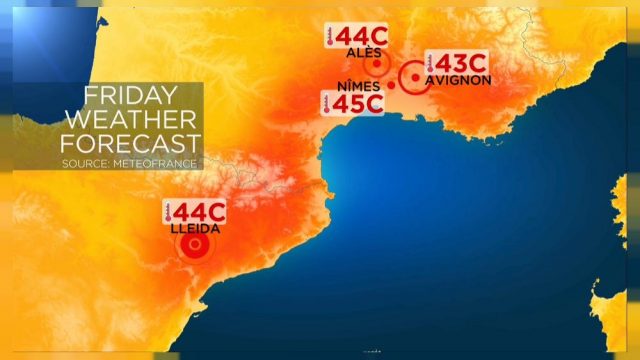 Highs of 45 degrees Celsius are expected in southern France on Friday.

The extreme hot weather is expected to break all-time records as temperatures increase even further in parts of Europe.

The French national weather service took the unprecedented step of issuing red alerts, the highest possible, in 4 of its departments. The previous all-time high in France was recorded during the deadly 2003 summer – with temperatures hitting 44.1 degrees in August that year. Most of the country remains on an orange alert, the second-highest level.

Swathes of the continent are experiencing extreme heat. Germany, France, Poland, and the Czech Republic have all recorded their highest-ever June temperatures yesterday, and in Spain firefighters are battling Catalonia’s worst wildfires in 20 years.

Christella Robert, a meteorologist at Meteo France noted: “A heatwave of this scale so early in the year, in June, is exceptional.“ She went on to say “We should expect more intense and frequent heatwaves with climate change… these extremes will be accentuated with earlier or later heatwaves.”

Euronews’s Anelise Borges reports that French authorities are warning “that everyone in that part of the country is at risk, including young, healthy people.” Borges added that this topic has dominated the headlines in France, despite a former president launching a new explosive book this week and President Macron making controversial remarks at the G20 meeting in Japan.

In Spain, wildfires in Catalonia have been described the worst in the last years. Over 500 firefighters and soldiers are tackling the flames in the region of Tarragona. The situation is likely to get worse according to the fire authorities in the area.

Our correspondent in Barcelona, Cristina Giner, reports that “these fires are huge and that the local authorities say this wildfire could be catastrophic”. Giner also said the head of the local fire service believes the high temperatures today are expected to reach 43 degrees Celsius potentially making this operation very challenging.

Watch Good Morning Europe’s reports on the red alert issued in France and wildfires in Spain in the player above.