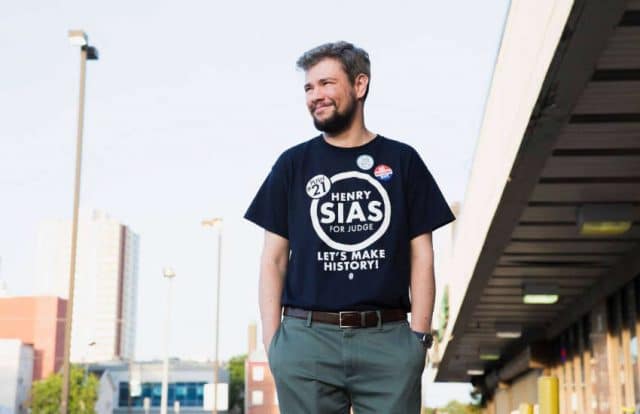 The criminal defense and civil rights lawyer ran to become a judge for Philadelphia’s Court of Common Pleas. This court hears both criminal and civil cases.

‘Waking up today,’ he wrote on Facebook. ‘It’s tough to see that the election results were not what we hoped for. But there is so much to be proud of.’

He then added: ‘In the history of our city, a trans man has never received the support of an institution like the Democratic party, until we did. Never before had a trans man’s candidacy for Philadelphia judge been taken seriously, until we did.

‘I am proud of the campaign that we’ve run and humbled by all of the support we received.

‘While we did not win, the gains we have made will never be erased. Transgender men will be able to stand a little taller in Philadelphia today because of all of the work that we have done, and the justice system will be closer to recognizing that trans people will not be marginalized.

‘Because of our work, the sun is shining a little brighter in Philadelphia today. Let’s take a deep breath and enjoy the movement that we’ve built and the history we made.

‘Thank you all for believing in our campaign,’ he wrote.

Sias came out as transgender at the age of 35. He then married his wife Carey in 2013.

‘My name wasn’t always Henry,’ he says in the voiceover for his campaign ad. ‘Men like me — transgender men — are not supposed to be visible. We have never won an election for state or federal office, let alone judge.’

‘I’m running for judge because I know what it’s like to be marginalized and disenfranchised,’ he said.