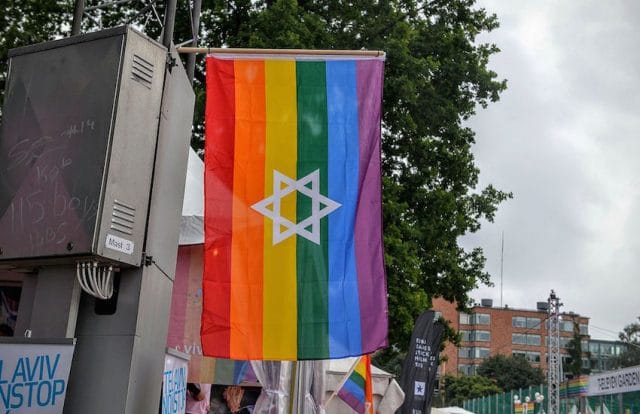 On Friday, 7 June, the Washington DC Dyke March was held for the first time in twelve years. The theme for the event was displacement. It was meant to focus on the rapid gentrification of the DC area that’s increasingly pushing out LGBTI people.

However, that theme was overshadowed by a different controversy: the .

Jewish Pride flags are exactly what they sound like: rainbow flags featuring the Star of David in the middle to symbolize one’s pride at being both Jewish and LGBTI. The organizers did not see it this way, though.

The organizers of the event ‘nationalist’ symbols like the flags of Israel and the United States. To them, the Jewish Pride flag looked too much like an Israeli flag (both feature a Star of David in the center). Palestinian flags, however, were acceptable as they are seen as ‘a symbol of freedom from oppression.’

Ahead of the event, the organizers wrote a reaffirming their decision.

‘’The “Jewish Pride Flag” seemed to only rise in popularity after the Chicago Dyke March — it was never a flag that we felt directly connected to, and it does not represent all Jewish Dykes,’ they wrote. ‘The flag is a Star of David placed in the center, superimposed over a rainbow flag, and is almost entirely reminiscent of the Israeli flag, swapping out the blue and white for a rainbow.’

To be clear, the Jewish Pride flag was used by many before the , where American Jewish lesbians were asked to leave the event due to the flag. Additionally, there is a specific Israeli Pride flag which looks quite different to the rainbow one described. Rather than being a full rainbow flag, it mimics the Israeli flag by being white with rainbow stripes to replace the blue ones at the bottom and top.

‘The star of David itself only became publicly popular as a symbol of Judaism in the 19th century — it coincided with the First Zionist Congress choosing the six-sided star for the flag of the future Israeli nation state in 1897,’ the organizers continued.

However, the Star of David has been a – way before the founding of the modern state of Israel.

‘That being said, the Star of David represents more than just Israel when not on a flag and can be brought to the march in many other forms without question. It is not the only symbol available to us. We welcome yarmulkes, tallitot, tefillin, rainbow pomegranates, Lions of Judah, Hamsas, chai, a menorah and anything that doesn’t directly replicate nationalist images and symbols,’ the organizers state.

Yet, and the are also Israeli symbols. Plus, objects like talliot and tefillin are . They are not commonly used outside of prayer to symbolize Judaism.

Following this controversy, the National LGBTQ Taskforce for the event.

‘After recently learning of the decision by DC Dyke March organizers to discourage attendees from carrying the Jewish pride flag, the National LGBTQ Task Force withdrew our support for the DC Dyke March,’ the Taskforce said in a statement. ‘The Jewish Pride Flag is a symbol that represents the greater LGBTQ Jewish community – around the world and of many perspectives. Additionally, we are disappointed that this action distracts from the appropriate and needed focus on DC residents and housing policies that favor gentrification.’

Other prominent LGBTI figures, like attorney Roberta Kaplan, who helped win marriage equality in the United States, also condemned the actions of the DC Dyke March.

‘I am a lesbian who has spent much of my career fighting for the equal dignity of LGBTQ people,’ Kaplan in The Forward. ‘I am also Jewish. My client, the late Edie Windsor, who helped to win marriage equality nationwide, was also Jewish. So was her spouse, Thea Speyer.’

‘When she was alive, Edie loved to march in the NYC Dyke March. In fact, it was a recurrent argument between us; I was always worried she would get hurt in the crush of the crowd or by a hater on the sidelines. Edie always ignored me and marched anyway. She did so because she loved being in a space where she could openly celebrate everything that made her Edie. She was a dyke and she was Jewish. And she had reason to hope that the spaces where it was acceptable to be both in America would continue to grow over time.’

‘Edie and I spent a lot of time discussing these issues. I am quite certain that, were she still alive, Edie would be devastated by this ill-considered ban on meaningful Jewish symbolism at a march purportedly celebrating the beauty of diversity.’

On the day of the event, a counterprotest was led by advocacy group Zioness. Other Jewish advocacy groups including A Wider Bridge and the Jewish Community Relations Council (JCRC) of Greater Washington also participated.

Zioness and other Jewish activists in the Washington DC area marched proudly with Jewish Pride flags. But of course, there was an altercation when the two groups met face-to-face.

‘In order to have the Jewish Pride flag not be about Zionism, all you gotta do is just remove the star,’ an organizer said to Jewish counterprotester, .

‘How do you propose I move the star?’ Black responded, holding out her Jewish Pride flag.

‘You could have brought something different,’ the organizer replied.

Ultimately, the counter protesters were allowed to join the Dyke March.

‘Being forced back into a closet after being forced to leave a different didn’t sit well with me,’ Steph Black tells GSN about her decision to attend the March.

‘The first pride was a protest. Today I showed up to protest the closet that the organizers tried to put me in. I showed up as my fully queer, Jewish self. I rocked my Jewish Pride flag. And it felt incredible.’

‘A Dyke March is not a Pride parade,’ Sobel tells GSN. ‘It’s supposed to be a safe space just for queer women, not for men and allies.’

Sobel believes that the Jewish community was not properly informed about what a Dyke March is and the history behind it.

Still, Amanda Berman, the founder of the Zioness Movement, took the time to call Sobel. Berman heard her concerns and apologized.

‘The straight allies took more time to consider my feelings than the Dyke March did,’ she says.