Home Gay Life Here’s why this gay man has no sympathy for Theresa May’s tearful... 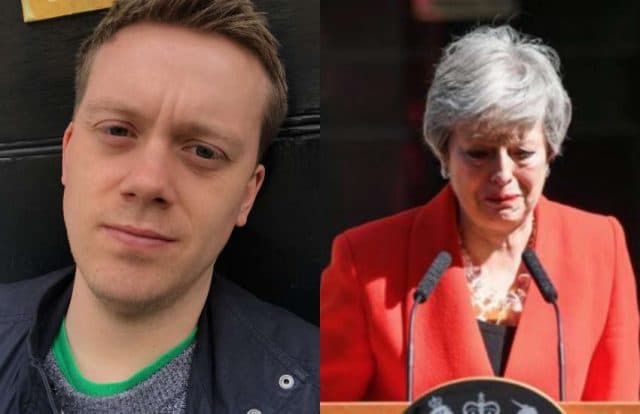 The Prime Minister of the United Kingdom, Theresa May, (24 May), officially stepping down 7 June.

But during her resignation speech outside 10 Downing Street, she shared a rare moment of vulnerability.

‘I will shortly leave the job that it has been the honor of my life to hold,’ she said in her speech. ‘The second female prime minister, but certainly not the last.

‘I do so with no ill will,’ she added, as her voice begins to shake. ‘But enormous and enduring gratitude to have had the opportunity to serve the country I love.’

She then swiftly turns around and walks back into 10 Downing Street, quick to try to shield herself from TV cameras capturing her tearful goodbye.

But it’s too late:

Sky News presenter Adam Boulton asked during a TV segment: ‘Owen, you say you don’t have much sympathy for her?’

Jones then replied: ‘I’ve got less than no sympathy for her.

‘She didn’t publicly break down publicly over the victims of Windrush, who, because of her policies, were driven from their homes, denied medical care, and even kicked out the country.

‘She didn’t cry publicly over the dozens of working class people who burned to death in Grenfell Tower. She didn’t weep publicly over those who’ve had their benefits stripped from them, those driven to food banks, because of her policies. The victims of universal credit.

‘I think our media can often express much more sympathy for the powerful – in her case, she will lead a no doubt comfortable and affluent life to her very end, rather than the victims of their policies, who I’m afraid have been driven into misery, insecurity and turmoil as a direct result,’ Jones said.

Boulton then asked: ‘Can’t you just respond on a human level?’

Jones responded: ‘I have responded on a human level.

‘I’ve spoken about the humanity of those who have suffered as a consequence of her policies and I wish the news would give far more space to them rather than spending time discussing the prime minister crying because she can no longer hold the most powerful job in the country,’ he said.