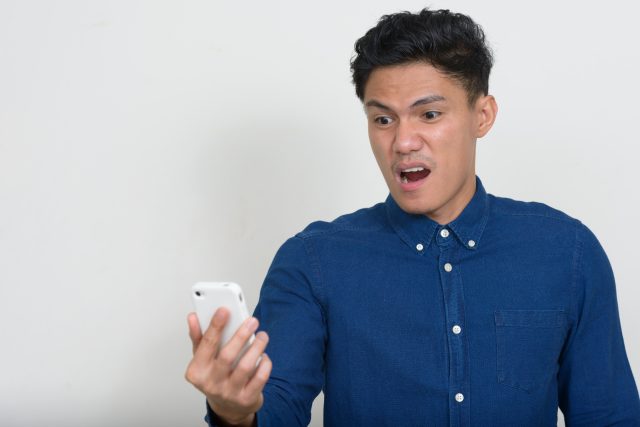 What do you do when you’re on the DL and your straight BFF “accidentally” sends you a picture of his junk? That’s what one guy wants to know.

“I met Joe over a year ago through a mutual Xbox friend,” the man writes in a now-deleted Reddit thread titled Friend (Accidentally?) Sent Me A Dick Pic. “Since then we grew close over gaming sessions (it happens!) and eventually exchanged phone #s, Facebook, IG, Snap etc.” The man goes on to say that he and Joe talk about all sorts of things outside of just video games, and often get together to watch Netflix or play Xbox Live. You know, typical dude stuff.

One day, during a Skype session, the man says, “Joe flashed his ass, dick and balls to me. We laughed, all harmless fun and games.” Another time while the guys were watching Netflix together, Joe said he wanted to “share a hotel bed together, sex stuff, etc.”

“Basically, I just always take it as him joking,” the man writes. “I’ve seen him and I’ve seen his girl, so it’s hard to take him seriously when he says gay things.”

Still, it’s been hard for him not to develop feelings for his gaming up. Then something happened over the holiday weekend that has completely turned his world upside down. When he opened the text, the man was shocked to see it was a dick pic from Joe.

“Between us gaybros, it was perfect,” he writes, though he’s not sure how to interpret it. “Joe is a good friend of mine and since this incident I’ve been torn between ‘He meant to send it. He was drunk. Or. He knows I like him’ and ‘It was a mistake, the pic was meant for girl. Don’t screenshot it’.”

He continues: “My current dilemma is speaking to him about this incident without ruining our friendship. Joe is someone that I am comfortable coming out to but I would hate to approach him the wrong way about this. As bad as I wanted to talk to someone else for advice, I didn’t bring this up to any of our friends. We’re all close and honestly there’s no way these guys don’t at the very least assume that I’m gay, so I’d hate to wrongly out someone else.”

The man says he’s barely slept a wink since all this happened.

“I’ve been struggling with this,” he says, “and I’ve never been in a situation that I didn’t know how to handle.”

Sounds like a precarious situation. What do you think? Was it just an accident, or is Joe trying to make a move? Sound off in the comments…