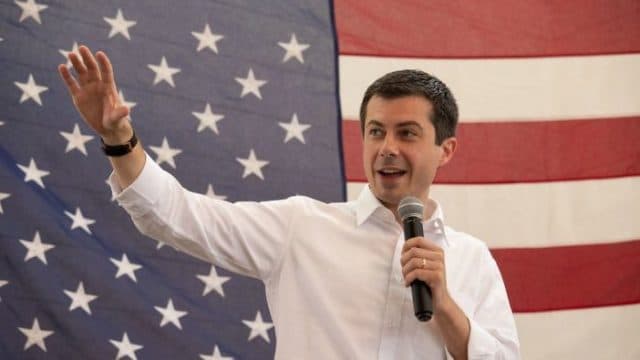 For the mayor of a small midwestern city, Pete Buttigieg sure is a fundraising machine. He raised almost $25 million dollars for his presidential campaign in the second quarter of the year, raking in more money than any of his competitors, including former Vice President Joe Biden.

Now Buttigieg has tapped into a rich vein of money: Hollywood donors. Apparently the combination of Buttigieg’s smarts and his historic campaign as the first major gay presidential candidate is enough to make lots of people in the entertainment world open up their wallets.

Not surprisingly, Buttigieg has proven popular with the LGBTQ powerhouses. David Geffren has already maxed out on his contribution, as has designer Tom Ford. George Takei is also a contributor. Meanwhile, Ellen DeGeneres, wife Portia Rossi and Sean Hayes are among the co-hosts for an A-gay fundraising event being held this week at the home of NBCUniversal executive Kevin McLellan and his husband. Tickets for that evening are $500.

Another event this week that will be at the home of executives Mike Rose and Ruben Rodriguez was rescheduled from last month, when Buttigieg canceled it in the wake of a police shooting of black man in South Bend. Buttigieg’s return to South Bend also forced the cancellation of a fundraiser hosted by Pose producer Ryan Murphy.

Of course, Buttigieg is far from alone in tapping the Hollywood market. Biden has done well with executives. Sen. Kamala Harris has gotten contributions from Don Cheadle, Jennifer Garner and Rob Reiner–as well as from Ryan Murphy and Lily Tomlin.

Donors giving to multiple candidates isn’t surprising. The fact is that most of Hollywood, like the rest of blue America, just wants someone who can beat President Trump. Plus the maximum contribution of $5,600 (for both the primary and the general election) is sofa change for a lot of Hollywood types.

Money will get you far in politics — but only so far. The question remains whether Buttigieg can convert the cash into momentum. Despite a strong showing in the candidates’ debate last month, his overall poll numbers have been pretty flat at best, hovering in the mid-to-high single digits.

With that much money in the bank, though, Buttigieg can focus on developing a pathway to winning the Democratic presidential nomination. That’s a luxury that many of his competitors will never have.