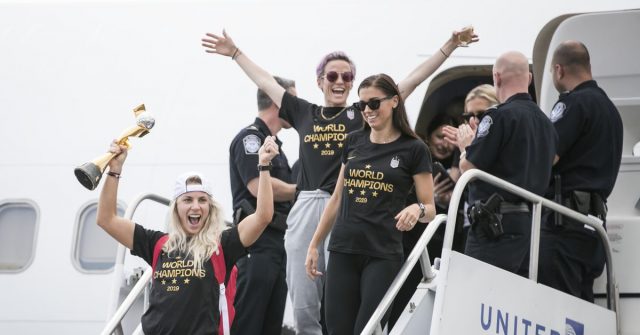 The U.S. Women’s National Team is waking up in American beds this morning, catching up on social media and news headlines about their historic World Cup victory, after a virtual blackout on their flight from France to Newark, N.J. on Monday.

On Wednesday, they’ll parade through Lower Manhattan’s Canyon of Heroes in a ticker tape parade, and receive the key to New York City at City Hall. The last time NYC threw a ticker tape parade it was for the 2015 Women’s World Cup champions, some of whom are 2019 champs as well.

But before the public tribute, here’s a look back at how the USWNT celebrated behind closed doors, from the pitch to the locker room in Lyon, as well as aboard their eight-hour flight across the Atlantic, and everything in between.

Thanks to the team and its players for sharing their experience through Twitter and Instagram! Depending on your internet connection, loading these links may take awhile (but it’s worth it!).

GAYS rule. It’s science. And you are welcome. https://t.co/Cc2qC1NfIE

Be sure to play this one with the SOUND UP!

You’ll find many, many many more wild pix of the celebration on Ashlyn Harris’s Instagram stories, collected here by our friends at SB Nation. Oh, look, here’s Megan Rapinoe joining the party!

when the presser holds you back…

so you’re welcomed in style. pic.twitter.com/8w9rioUxCd

These ladies know how to make a grand entrance.

my brain: don’t say it…⁰me: IT’S A PARTY IN THE USA! pic.twitter.com/XxuXWo3vz5

How many ⭐️ is that?

But we gotta go home. We have a nation to celebrate with! pic.twitter.com/NXs9Wchs2j

Alex Morgan knows how to hold on tight to her dreams.

.@alexmorgan13 is making sure the most recent member of the fam makes it home safe too. pic.twitter.com/8ACI1xbAUH

Tell the We’re Coming Home. See you in a few, !

Eight hours in the air, no WiFi.

HOME! (Well, actually… Newark, but you get the idea)

What did you bring us?

Brought you back a little something.

And we leave you with this look back at Megan Rapinoe, circa 1999, thanks to @uswnt Can you guess which girl is Megan?